As was previously reported here, the last Super Capital kill in the region of Aridia was a Wyvern piloted by XtraPain of The Blood Covenant [VIT.C] Alliance. Since then the #REKKINGRUSKI gang of LowSechnaya Sholupen [-LSH-] have been determined to catch anything else the comes their way.

This article relates to the first Super Capital kill with the new Kador SKIN (Super Kerr-Induced Nanocoatings) on an Avatar class Titan. It was killed in the Keri system of Genesis after being initially spotted in Yehaba, the system in Aridia where the Wyvern was recently killed, and was packing the 2.5 billion ISK skin following their addition in the recent Mosiac patch. The pilot is ZedLey of the Rising Brotherhood [R..B] Corporation, who have been apparently inactive and quiet since they left The Hub Life [DOSH] alliance in October of last year, following it’s closure.

3Better once again provided me with the information on behalf of [-LSH-].

Everything was pretty simple this time. Rad1st and me were afking in yehaba with some of our chars in space while this dude cynoed in right there. We did notice the strange cynomaker a couple hours before who was hanging somewhere in space, but he soon left the system. i was trying to add him in WL, but eve was bugging showing me some error about it. I got pissed off and went afk for a half and hour or so until that very moment when i saw this dude again with cyno in space and his corpmate in local. KB showed him as an aeon pilot from the past.

I quickly packaged 2 of my hics in a carrier, Rad1st found one of his cynochars right in the target’s next destination system, i jumped there with 2 of my chars in keri as the cynoreaper came in. He soon went out for several minutes which gave me the time to set my hics up on both sides of keri\itrin gate. The cyno entered keri again and warped to the sun. i moved out my second hic from keri, leaving him alone letting him feel his safety. We already have cpt pipo and rad1st in one more hic and a buzzard. Khan soon lit the cyno and “aeon” exited yehaba. We used gate and started scanning. I was highly surprised getting a titan-class ship on combats. Rest is obvious, since he was not travel fitted. 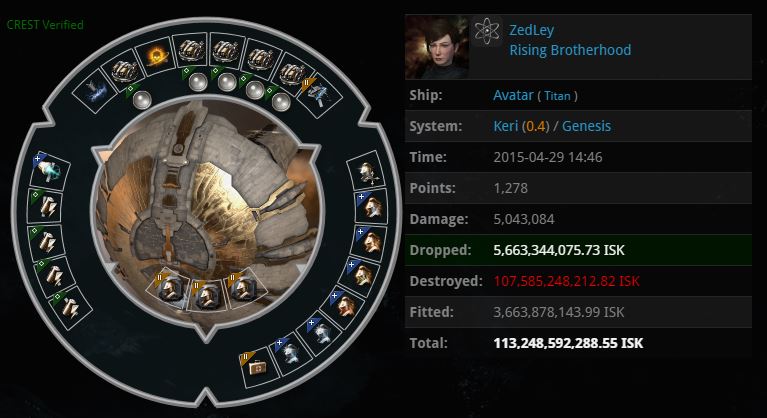 Compared to the last kill by 3Better and friends, where they struggled to get 100% scan until the 3rd attempt, this was quite simple. Giving them an extra surprise when it turned out to be an Avatar and not an Aeon as suspected.

The pilot ZedLey was kind enough to provide me with the following information which should explain how it was so simply killed:

They caught me was easily and simply with Jump, Scan probes, point and dead. Though first I should tell you why they were able to catch me. I had an accident over 1 and a half years ago which made it impossible for me to get into the Game. Now I am back and found out that all of my stuff is still in null sec. But unfortunately I have no blue standing to anyone so was travelling with a titan in enemy space.

I found out that they made changes to the jump system which makes it nearly impossible to get out of enemy space and to a safe spot when the safe spot is on the other side of the Universe. So I made a friendly support ticket to ask CCP if there is a chance they can move the titan to the the new safe region I am in so I can restart the game and reactivate all my accounts. Allowing me to start playing again following my long break and accident.

The ticket is still not answered so I made the decision to move the titan down and give some people a chance to get a titan kill. I am titan and super capital pilot only so I know the basics and can fly and use them correctly. I then decided that when I didn’t get an answer, where a no would have helped too so I could stop playing again, I would use one of my cyno alts to create a route for fun. Starting in Kumpel, Querious, next to Pandemic Legion [-10.0]. It wasn’t until I was 4 jumps out of the safe system that I found the first people following my cyno character.

When they left system, knowing they were trying to catch and bait me, I decided to jump in and warped the titan away from the cyno as I waited for the probes to hit and their devoter to land. I wrote “gj” in local before they even got probes out knowing I was going to die but they did their job correctly so why not give them my death as CCP can’t decide to answer a simple question.

Really nice work from the guys trying to catch me and I hope you have fun with the loot but to CCP I don’t need an answer anymore as the titan is gone! Now I am in the famous club of lost super capital ships where most players never want to be apart of it.

It appears that this loss simply occurred because the pilot found himself in a poor location following his return to the game. Usually pilots tend to travel to lowsec with Supers/Titans when they have to leave the game for a long period of time, but clearly from the mention of the accident, it appears that he was forced to leave the game quite abruptly, preventing him from safely moving to a safe location in preparation for a possible return.

It is unknown if CCP would have answered his request and moved the vessel, as they used to be moved from space and into a station following at least a 6 month away period. Clearly the pilot was hoping to make a full return to the game and the lack of response from CCP is what caused him to move solo, knowing the peril of his actions.

Do you think CCP should have moved him? Would you have took a similar stance? Let us know in the comments below.

The video of the kill is below: