A few days ago, I posted a small article in hopes of alerting people to the danger posed by Bling-fit Syndrome. Sadly, there are still those pilots out there suffering from BFS. Caring pilots across New Eden are taking up the banner and bringing attention to this malady. Today, Sam Raymond contacted me with the details of an intervention he and his friends held for a BFS victim. 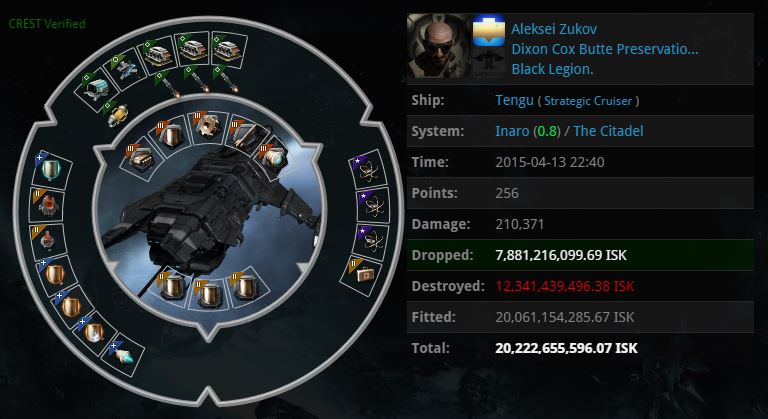 Me: So start me off. Where were you when this happened and what were you doing there?

Sam: I’d just logged in and undocked from Madirmilire warped to the Niarja gate and had been there roughly 3 minutes, No other marmite were near apart from magic preacher who was on comms but chilled in station. I spot the tengu landing with a neutral alt

Me: Was this a gate camp, trap or just happy coinciedence?

Sam: Happy coincidence, I solo roam and rarely gate camp. I tackle him and proceed to attempt a bump, but he’s not re-approaching gate, not directly anyway. He writes in local “Aleksei Zukov > not with your shit tier DPS, sorry”. Eventually after about 30 seconds of showing off his repping capability he’s burning back to gate.

Me: Were you at war with this guy’s corp? I assume so, since you are in Marmite and I think you may very well be at war with everyone. Just how many wars are you guys in right now?

Me: Rough timing for that poor bastard. If my CEO has said it once, he has said it a hundred times, Stay out of the hubs and trade lanes when we are at war. I don’t always listen of course because sometimes I run out of whiskey and that dog just won’t hunt.

Me: So did you put out a call on the Marmite phone?

Sam: Not at this time, funnily and luckily enough an old friend i flew with very closely before about 1 year ago is sat in a neutral ganking thrasher and has seen me tackle this and proceeds to scan its fit. He valued it quickly at 16 billion.

Sam: I’ve called on ts that i need magic preacher assistance to ping pong this guy the otherside of the gate, not knowing yet its worth, I knew he was fast probably 100mn but not blingy. Once I get the scan intel from my buddy, I’m screaming alert in Alliance chat and teamspeak.

Sam: I didn’t know he was cloaky at this point so we were going to ping pong him, none the less the gnosis lands and tackles him the otherside, tengu burns back into Niarja and into me. This is where he cloaks and proceeds to taunt in local saying, “aren’t you persistent.”

Me: So the guys is cloaked and talking shit. How did you get him out from under the cloak?

Sam: I jumped from Niarja to Kaap and he followed as there is no stations in Niarja, once in Kaap i warped my alt to Kamio gate and my main to Inaro, at this point about 5 marmite are decending from Uedama to Inaro. About five minutes pass and he decides to jump into Inaro where he’s met with a few frigates, myself and a vexor. He didn’t cloak in time. I was able to lock him with 1100 scan res from a dual sebo cynabal i fly. Then we landed a few nice bumps and a hugin comes from 3 jumps away. As more time passes a few more marmite land on field, mostly in frigates, he’s tanking us really well, EFT estimates with crystals he’d be around 4k sustained.

Sam: The video starts from after bumps have landed, we managed to get him 30km off gate with about 5 or more points and multiple webs

Me: Let’s see the poignant video of this Darwinism in action.

Me: Nice, clearly he is suffering from Blingfit Syndrome. It was so nice you you guys to put so much into that intervention. Maybem in time, he will seek treatment.

Me: He should have ready my article on smack talk. Rules 1 through 3 clearly state: “Don’t be a dumbass”

Sam: In the end he was capped out by one medium and one small nuet. He was dead either way as we had seven Curses about 14 jumps out. Lot’s of people burned there in frigates for fear of missing out on the kill mail.

Me: I certainly would have whored on it given the opportunity. Whoring is good.

Sam: We were expecting a BL fleet to land any moment to bail him out so we were doing all we could to break his tank as fast as possible. In the end it all worked out.

Me: Well done, Sam, next round is on me.

NOTE: I have sent an email to Aleksei Zukov to get his comments regarding the article but as of the time of publicatin, I have gotten no replies. Additionally, I have reached out to Dixon Cox Butte Preservation Society CEO, BoodaBooda but again no reply as of yet. I will update in comments section should either party respond.