CCP Falcon proudly announced that the Tiamat patch was released successfully and smoothly this morning. God damn it CCP your getting to good at this…

We are happy to announce that the Tiamat release has been successfully deployed!

In addition to these features, a number of new inhabitants of New Eden will be emerging from their slumber to begin exploring, their motives unknown and their tolerance for capsuleers untested until first contact.

You can read more about what’s coming in the Coming to EVE in the Tiamat Release devblog by CCP Seagull, and check out the full patch notes here.

A few small issues have been acknowledged by CCP on the forums so far;

• If the message “You are engaged in combat!” (which is prompted when undocking in empire space while having limited engagement timer) is suppressed with the answer     “No”, all subsequent undocking attempts will fail silently. This can easily be fixed by going to the ESC menu / Reset settings and reset that message in the “Reset Suppress     Message settings” column. This has been fixed internally, and the fix will be deployed very soon,

• A few in-space objects in the starter systems are missing names and will therefore display as “[no messageID: id ]” in the Overview and on brackets. This has been fixed        internally, and the fix will be deployed very soon

• The columns in the result view for the contracts search are messed up.

In related news the Drifters, a new faction with ties to the Jove empire, were also released in the Tiamat patch and are already making themselves known on the Tranquility server. With rumors of doomsday like weapons being fired when threatened, the new Drifter battleships are being treated with suspicion and caution by most of the pilots of New Eden.

However Dantheus, a member of the Fatal Ascension alliance and the Easy Co. corporation, decided to test these new NPC crafts with his tried and tested ratting carrier believing that the Thanatos, which had tanked  many Sanctum anomalies, would easily be able to tank a single NPC Battleship… He was wrong. 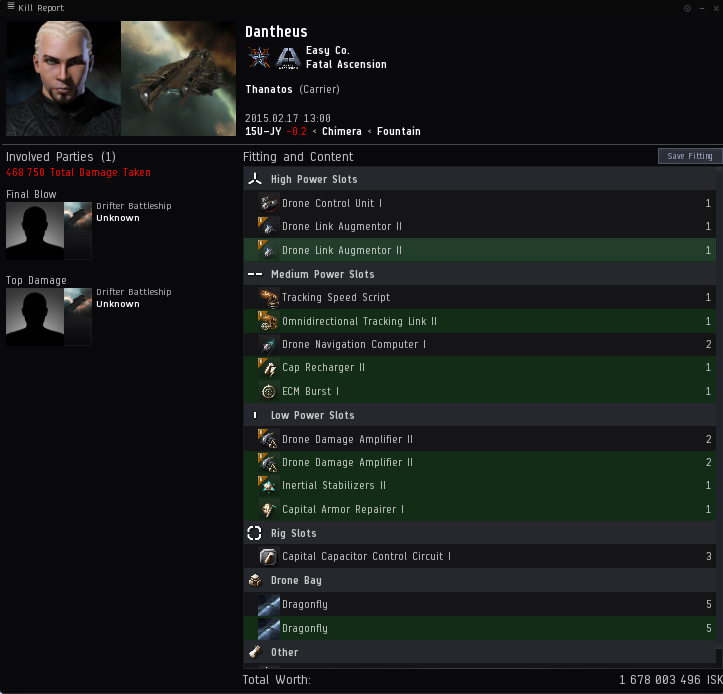 He is now going to be known as the first pilot to lose a carrier to one of the new Drifter Battleships.

I don’t think, however he will be the last.

I am expecting a whole plethora of carriers and faction fitted Battleships of both tech 1 and tech 2 varieties to be annihilated by these Drifters until a meta comes up which is generally agreed upon as a counter to these new NPC’s.

For that to happen though, they have to drop loot which is worth putting your ship on the line for and maybe some kind of bounty should be applied to them. I do not think a Concord bounty would make sense, as they don’t seem to be hostile (yet) but a scientific bounty from one of the universities or NPC corporations within the game who want to study them and learn about them at any cost may make sense.

ISK for Drifter corpses and Tech? I wonder…