The Drifters are upon us, and they are not to be trifled with. The new NPC faction (or Jovian sub faction) will enter the game in the next expansion, Tiamat, dropping on February 17th. The Drifters pilot extraordinary battleships that are set up to challenge even the most experienced players. Much like Incursions and Burner missions, this is high-end PVE content from CCP.

The Drifters are not your typical NPCs. They are built on the new the AI (Tale System) that was introduced with Incursions & improved upon in Burner missions, and is being used to power Circadian Seekers and, now, the Drifter battleships. The future of PVE is highly intelligent and coordinated enemies that will chase you, wait you out, and mercilessly pod you. A truly terrifying experience. So far, they will not attack you unless you provoke them by attacking them first. Drifters, however, are a new faction and have standings so, conceivably, they will attack on sight if you have low standings with them.

The origin of these Drifters is shrouded in mystery, but they seem to be related to the Jove. Their spawns are found around unknown structures (aka, listening towers) and strange wormholes found in New Eden, regardless of security rating. Some players speculate they have come here through wormholes, while others suspect they have been here a long time and are just now being discovered or decloaked. Lore enthusiasts are relishing the speculation, as many theories and clues are pieced together.  Officially, no one knows who they are or what they want.

*** Spoilers below***
All facts below are from the test server and subject to change when the features go live.

The Drifter ships are dark, angular and reflective of environmental light. Once attacked the the battleships fall into a fast orbit around your ship, making it hard for capital ship turrets to hit them. They protect themselves with a double layer of shields; a blue layer with a normal shield below that. Their shields are their primary defense, but not their only defense: Once you blast past the blue layer they will use electronic counter measures (ECM) to break your target lock. If you can get past both shields they are no stronger than ordinary battleships. The Drifters best defense is a strong offense.

Their turreted weapon systems, called Lux Kontos (Light Spear), are 7 turrets dealing 1,000 each damage each. That alone will put a strain on local repair modules and logistic pilots. Once the Drifters deem you a real threat, either by damaging them sufficiently or bringing an over-powered ship, they unleash their super weapon. It resembles a sub-capital doomsday and delivers an astounding 185,000 onmi damage (reports vary). The omni damage means you can’t focus your tank for one particular damage type. A single blast from this weapon will slice through a Tech 2 or faction battleship, even Marauders in Bastion mode. Drifters scale to the perceived threat and you may encounter two or more coordinated and intelligent combatants that perform much like true PVP pilots.

Essentially, the Drifters content is like a game of  “Russian Roulette” for a gang, (No offense to our Russian friends), whereby someone in the gang will definitely die. Imagine a gang of 20 battlecruisers attacking a single Drifter, with one player being eviscerated every few minutes – Not unlike the Rebel Fleet in Return of the Jedi under the pressure of the “fully operational” Deathstar:

Soloing (pun noted) more than two or three Drifters is nearly impossible, and even taking one on is a considerable accomplishment. Pilots might want to bring a heavily tanked carrier with sentry drones, because any subcapital will be easily vanquished, and blap dreads are too big to effectively apply their damage (tracking) to the battleships.

If you do manage to destroy one, they have a unique green explosion, but yield no loot in the wreckage. No bounties given by Concord either (at least on the test server).

The battleships can be encountered in two places: The first area is near the soon-to-be-uncloaked “unknown structures,” also refereed to as “Jovian listening towers” by players. These massive structures dwarf anything in EVE so far, reaching distances of 140K (just shy of warp jump distance, 150k) from top to bottom. Currently they are cloaked and being scanned by Circadian Seekers, but soon may spawn Drifter battleships. The relationship, if any, between Circadians and Drifters is unknown. 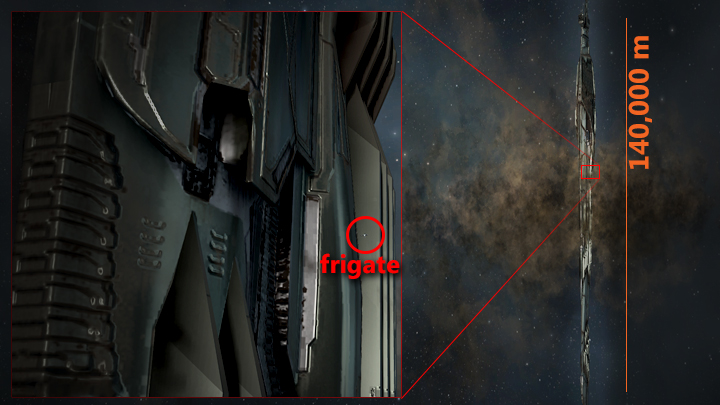 The “unknown structures” have only appeared in known space and have yet to be seen in wormhole space. They are easily visible when you enter a system by using your sensor overlay [guide], where they appear as yellow “landmark.” The systems that contain a structure are scattered all over New Eden with regional high and low concentrations varying. Here is a heat map overlay of their appearances as recorded by players: 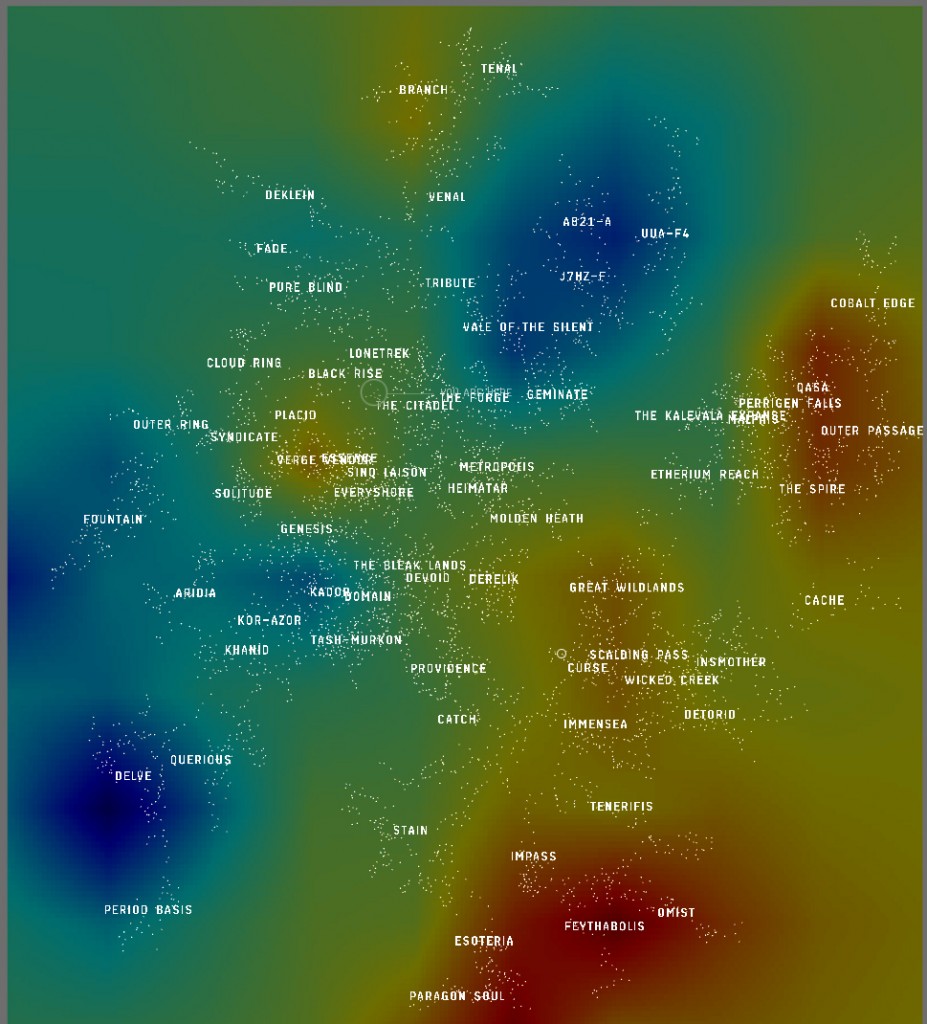 Notice the high concentrations (red) of these structures reside in deep space, and in non-desirable areas. The traditionally wealthy areas of Delve and the Northern regions have the lowest concentrations (blue). CCP appears to be spreading the wealth to new regions of space, or, perhaps, having these guys in your backyard is a curse. Players have also created (and continuously update) a list of systems to track sightings of unknown structures, much like EVE Scout logging the entrances to Thera [Link]. The map of locations for the structures as they currently exist can be found here [link]. More information on these unknown structures can be found on EVE Travel website [link].

The second type of location the Drifters will appear in are special wormholes bracketed by floating structures. These are also found in known space, exclusively. The wormholes can be used by the Drifters (as seen below) to travel, although players cannot enter them. It is conceivable that they move through these portals to support and reinforce other Drifters, creating a full net of NPC activity as opposed to isolated instances or spawns. Interestingly, similar brackets ares tarting to appear on planets in DUST 514.

The Drifters are still only on the test server. CCP may alter their final stats when they hit the live server, Tranquility. What is confirmed is that CCP’s new AI engine, and it’s evolution, will create much more dynamic and nuanced enemies. The hope is that these improvements lead to everything from NPCs erupting into battles amongst themselves that players can ‘third party’ on, to procedural creation of content; like ever unfolding mining fields. The sci-fi vision of a living, breathing, cyber world is closer than ever. Welcome Drifters, we’ve been waiting a long time to meet you.