CFC Titan down, baited by L0SER18q, and caught and killed by a Out Of Sight FC, Nemezida EG with the help of Total Absolution.  In the middle of Guristas territory, Venal, on a long dead-end pipe, Total Absolution sprung into action after being called in and the trapped the two Circle-of-Two Titans. The CFC responded immediately, and the fighting continues as this article goes to press. 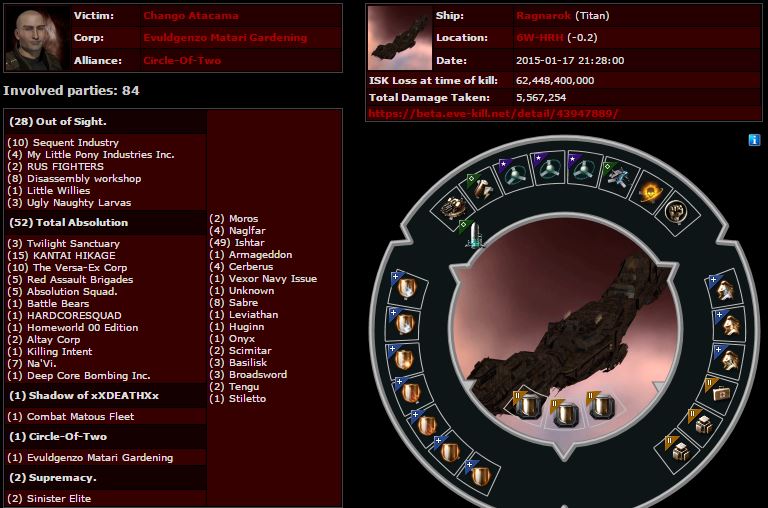 In their own words, the FC and the Titan Pilot.  They were interviewed separately, combined here for narrative affect:

Titan Pilot, Chango Atacama > scouts report a few dreads in siege in Venal. In range from me so I go take an eye. POS in RF, dreads still in siege (in hindsight, fishy).

Ambushers, Nemezida EG > Well we’ve baited them in cooperation with total absolution alliance. There was our friendly pos near n5y which is our staging system that came out of rf and we’ve sent a chimera to bait co2 titans, but they weren’t interested so we gave them like 4 dreads

Chango > I know the dreads have been used as bait once for BL, but BL is busy doing something else at that time, so I’m not too worried. Jump in Rag and Levi, DD two dreads

Nemezida > they jumped in 2 titans, 1 levi and 1 ragna, which we’ve managed to tackle

Chango > HIC lands, tackle and in come an Ishtar fleet from TT. As they say “oops,” Emergency fleets are formed.

Chango > I arrange max tank, open my own cyno before their inhib go up (of course they had an inhib). They did pick a system out of direct range though, in the end, backup is not fast enough, and cyno cycle down before they could jump so basically, I wait, DD again when the cycle ends, refit for armor tank, and finally the Rag explodes mid-refitting to hull tank.

Backup arrives, and fight still ongoing for the second titan but we are optimist, as reps are in range a trap well executed for sure.

Nemezida > The fight is still happening right now; but cfc caps and supers came to help, so we won’t be able to kill the 2nd titan.

Chango > I’ll be honest here: I have chosen the Rag from the start because it looks so good and it makes an awesome drive-by machine. I knew all along I would one day get caught. I played the game and I’m proud of this ship and all it accomplished for me. Tonight, I’ll drink to it, and then start looking for its new incarnation, because, IN RUST I TRUST.

Final words of thanks to CFC, they did try their best on no notice

The CFC were not able to save the first titan, but they were determined not to lose a second.  This is one of the advantages of herding with other capital pilots, there is safety in numbers. Had these two pilots belonged to a medium or small alliance without allies, there would have been 2 dead titans, not one.

ADDED: Nemezida EG told us to that the main organizer of this event was a player named L0SER18q