Recently, titan pilot Ved Run left his home in Vox Populi. to join Kenshin., a member of the NCdot alliance, and faced the monumental task of moving his arsenal 17 jumps to Querious, NCdot’s Headquarters. With the new jump fatigue introduced in the the Phoebe patch, moving his Nyx and Moros down took days. Now it was time to move his biggest asset: an Erebus class Titan. Ved opened his browser and opened a market window to begin shopping for the proper travel doctrine fittings. Somewhere in all that clicking around he might have slipped up and double clicked into space.

Unknown to him, the titan’s engines began to move the behemoth out of the protective POS forcefield. Like a shopper sorting through a bag of goods as his car rolled down hill, Ved was unaware. Titans don’t have parking brakes. You might avoid this by bringing up ISIS or the map so that any rogue double click doesn’t send you sailing out into the unknown. 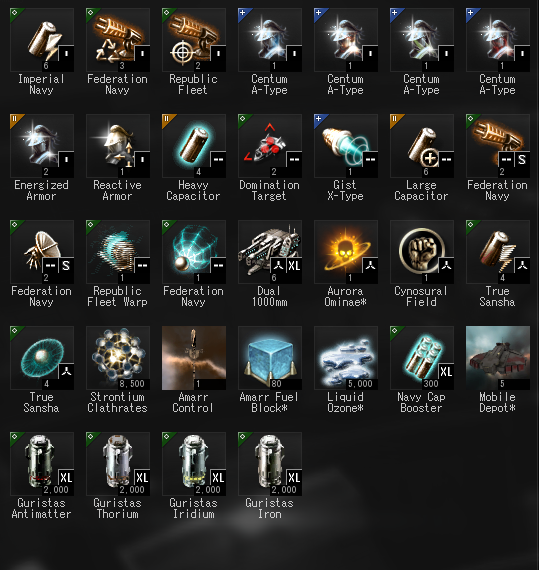 The odd titan slowboating out of its POS was not lost on the local pirates, Soul Takers. They had killed this titan before by using a “bowling” exploit. CCP handed out 30 day bans and restored the titan to Ved. This time, Soul Takers took screenshots and frapsed it to avoid any controversy. They also called in their nearby pirate pals, Shadow Cartel, for DPS help. The Cartel brought in dreads and the Erebus’ fate was sealed.

Update: From the perspective of the Pirates.

We had nearly caught him with Heavy Interdictors (again) almost a month ago when for some reason he was 200+ KM off the edge of his towers shields- so we had been staying alert for him to come back online.

Seeing he was new to NC. we figured it was a trap: our CEO stated on comms “If a Possible Titan Kill isnt worth welping dreads, I dont know what is.” With that we warped in Dreads, and I put in Triage to keep the HICs up- His towers shields defenses were not even doing damage.

Here were my 3 screenshots to my corp mates, and one of a corpie who was quick to land on grid after the HICs:

With the Chaos of getting Shadow on our Comms, having my Main several jumps away, and the completely unexpected nature of him boating out- I did not manage to catch FRAPs of it.

Ved didn’t know what had befallen him until it was far too late. The titan was down. When asked about his loss, Ved said this whole event was a “nightmare.”  Although he had enough ISK to buy another titan he was undecided as to whether or not he would replace his ‘Bus. His fortune was legitimately gained by methodically mining ice over the last 5 years.

Accidents happen, but dying in a high-priced ship damages the alliance’s killboard efficiency ratio. NCdot now has a titan loss on their record. NCdot FC Poision Kevin blasted “Hope you get purged you fucking twatwaffle.” Ved responded, “I dont know. Since it is a simple mistake, I accept a referee [a review].” After only 20 days in NCdot, 17 of them patiently moving ships, one accidental click has lead Ved Run to ruin.

But there is an alternate, more nefarious, explanation for this event. Titan pilots are celebrities in New Eden. Pirates know when they log in, and investigate immediately to see if there are any slip-ups. They are not the only ones keeping a watchful eye.

Five exotic dancers, using their ‘assets,’ may have worked their way into the pilot’s confidence, among other areas. Managing to get themselves aboard, Ved was naturally distracted as the dancers managed to unmoor the giant ship. Once set adrift, they surreptitiously alerted the waiting pirates, likely the dancers’ accomplices to begin with, who pinned it down and destroyed the gleaming symbol of Ved’s accomplishments.

The lady dancers were found in the wreckage, safe and sound. They were picked up by the pirates, who likely paid them their handsome and well-earned fees, for delivering the kill.

You never know. This is EVE.

EDITORIAL NOTE by Mail Lite: So this is actually the second time this titan has been destroyed by the same group of SHDWC and Soul Takers. 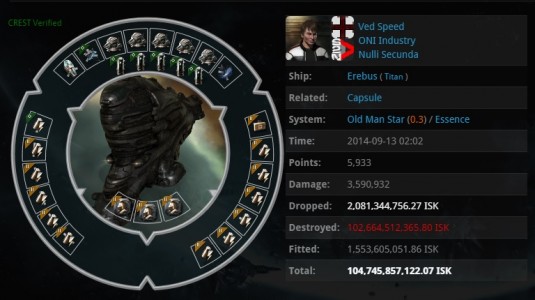 The first time was on the 13th September 2014 and involved the titan being bumped out of his POS shields, of which he was sticking out, and then destroyed. On that occasion the titan was reimbursed just a week later and one of the pilots who bumped the semi exposed ship was banned by CCP. This, and a number of other similar events, caused CCP to redefine their ship bumping and POS shield guidelines and confirmed that if a ship was not lockable then it was counted as protected by the shields and bumping it would be considered an exploit.

The Soul Taker pilot was unbanned by CCP after a public outcry and even had the support of the titan pilot, who believed that a permanent ban was a harsh punishment. Around a week after the pilot was banned the decision was reversed by CCP.