Day of the Dead Supercapitals

So today seems to be a day of killing super caps, with three super capitals and one titan being destroyed.

The first of the supers killed was the titan of Zadris, member of Psychotic Tendencies, which we have already featured on EN24 today in this article.

Then we have the Hel of MojoMojo and the Nyx of Kreea, both members of Lowsechnaya Sholupen.

And finally we have the ratting Nyx of Nepravda, who is a member of Goonswarm Federation.

Lets talk about the two supers of Lowsechnaya Sholupen first. Bluemelon of NCdot was moving a titan on one of his alts, out of the Khanid region to deploy it somewhere more useful. About six jumps in to his route, deep in the Aridia region, he got disconnected and when he got back into the game he found a Proteus was on top of his titan. Luckily his next mid was already placed so he opened the cyno and jumped away from the Proteus. The Proteus belonged to a member of Lowsechnaya Sholupen. They kept turning up as he jumped from mid to mid as his route was pretty obvious.

Bluemelon checked into the alliance that was following his titan and found that they had around five super capitals, which they had used on another killmail so Bluemelon contacted a Hax. FC, who are members of Northern Coalition. and offered to set himself up as bait. They started looking for a system that would work as a trap but couldn’t really find one nearby. BURN EDEN, another NCdot corporation had a few supers combat ready and already stationed in Aridia, so they decided that this would be the right area, they got HIC’s burning to the target system and then logged them off, ready to spring the trap.

In this time Bluemelon had got his alt online and made him seem active in another area of space, knowing that Lowsechnaya Sholupen had probably checked him out thoroughly.

Time to bait. Bluemelons’ Ragnarok logged in and jumped to his cyno in the target system. A few minutes passed before a lone Lowsechnaya Sholupen HIC showed up, got him tackled and the rest of the enemy fleet logged in and started piling into local through a recently opened cyno.

Not wanting to spoil the trap, NCdot waited until all of the five expected supers were on the field. When they were all present and accounted for, the NCdot fleet logged in and jumped into the fight. Two of the Lowsechnaya Sholupen supercapitals managed to ECM burst themselves out of the fight and warp away before extracting out of the system entirely and leaving their fellows to their fate.

Dre who is a member of Burning Napalm, part of NCdot, who lost an Avatar in Aridia to the same group last month managed to get his revenge by having another of his titans, piloted by an alt this time, get on the two super carrier killmails. 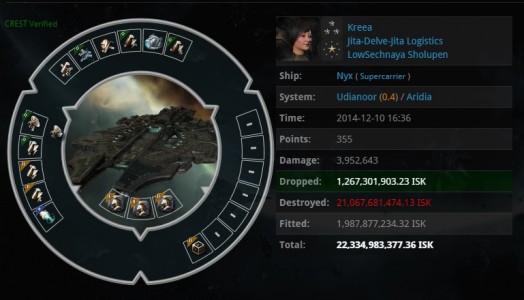 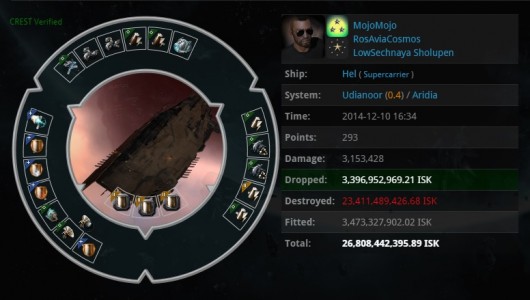 Battle report for the fight in Udianoor

Video of the fight from NCdot perspective.

Then we come to the Nyx of Nepravda. Hard Knocks Inc. had already scanned down their statics and were quite Fidelas Constans pilot had managed to find the direct static from Branch into the Hard Knocks Inc. home hole and proceeded to make himself a nuisance. If this had not happened then Noobman, one of Hard Knocks Inc. FC’s, would probably have stayed at home and not gone out to cause the CFC problems. He found a ratting carrier in A4L-A2 and got it pointed before calling in some friends to help kill it. While his backup was still on the way, a Nyx from the same alliance as the Thanatos warped in and the carrier refit warp core stabs and made his escape. Amazingly the Nyx, who had just warped into an unfriendly grid, just sat there, stationery, and allowed Noobman to get a point on it. Noobman started shouting on comms that the Nyx was tackled and he needed interdiction bubbles as soon as possible.

Step up the new member of Hard Knocks Inc, Tabernash who is an ex member of 0utbreak. He brought a Sabre into the anomaly that housed a desperate Noobman and the enemy Nyx and put up two extraordinary bubbles to stop the Nyx pilot jumping out of the system. 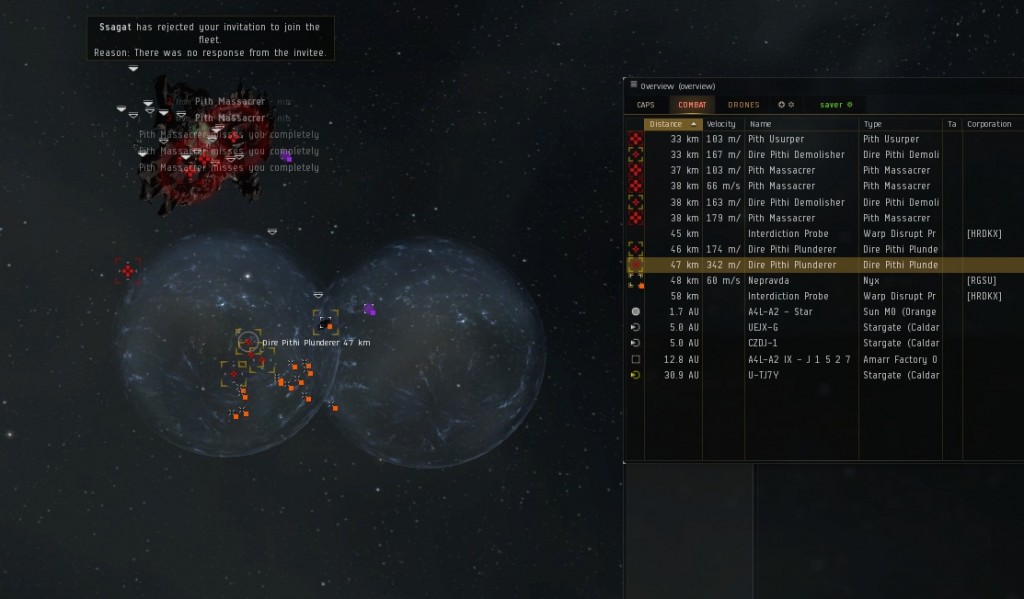 As the rest of the fleet landed Hard Knocks Inc. contacted Black Legion. and Lazerhawks to come in and offer DPS support. They also expected the CFC to form a rescue operation, and indeed those in BL. who have spies within the CFC alliances reported pings starting to go out about the tackled Nyx just as Black Legion. bridged out of K3J in Venal to a closer system and then start the 22 jump burn to the target system in Deklein, while getting updates on the status of the Nyx and any enemy fleets reported in the area.

As BL. arrived on the A4L gate, Noobman let us know that the Nyx had now been joined by a number of carriers who were attempting to repair the stricken supercapitals armor. Upon landing on the grid BL. noticed that they also had a small CFC Hawk force to contend with. Primary was called on the first Thanatos and then a second one was called. As the Nyx started getting to around 40% armor it was called primary by the Black Legion. fleet and due to his ratting, paper thin fit, he melted under the drone fire of so many Ishtars. 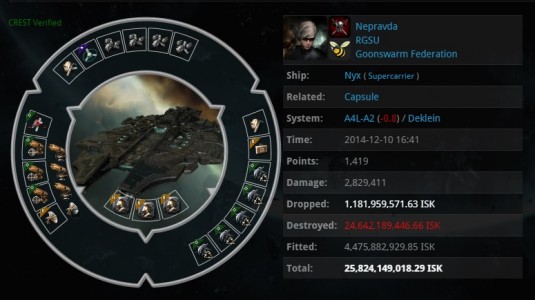 After the Nyx was destroyed, a Chimera was called primary but as he went past half shield, a CFC subcap gang of assorted Tengus and support ships landed and BL. with Lazerhawks and Hard Knocks Inc. in tow signaled the retreat and started burning away from the area.

A couple of the BL. Ishtars were caught but for the sake of a Nyx and a couple of other capitals, the trade seemed fair.

Battle report of the fight in A4L-A2