PL Titan and Aeon Down To HERO and Men.

Early Sunday morning at around 5.00 EvE time a Pandemic Legion Avatar belonging to Hurley, the alt of Perseus Kallistratos was baited out and killed by a mixture of HERO (Hopefully Effective Rookie Organization) and Black Legion.

When a rather well placed wormhole was found with a direct connection between Deklein and Catch, HERO coalition got into contact with Black Legion. and a trap was laid. Black Legion. got onto the wormhole and HERO dropped two dreadnaughts onto a POS in the target system. The POS had just come out of reinforced and Pandemic Legion brought in a subcap fleet including a number of Machariels and Oneiros logistical support to destroy the attacking dreads. After a long wait with just the  subcaps on field, Black Legion. decided to leave after hearing about a tackled Rorqual. As they jumped out of the system which housed the wormhole connection to Deklein, a HERO member frantically let them know that an Avatar had just cyno’ed in on top of the dreads.

HERO warped in a large fleet of interdictors who surrounded the titan in bubbles, meanwhile Black Legion. jumped through the wormhole and warped to support the HERO forces. The Black Legion. Ishtar fleet dropped bouncers and began to tear apart a number of the Machariels before starting on the Avatar. Black Legion. dropped cyno inhibitors which prevented PL from bring in support. When PL finally did manage to bring in support it was at range, way out of remote repair range of the titan, meaning all the newly arriving support could do was watch the titan die. The Avatar was soon nothing but a smoking debris field. This loss makes it the third Avatar that Hurley, PK’s titan alt, has lost. 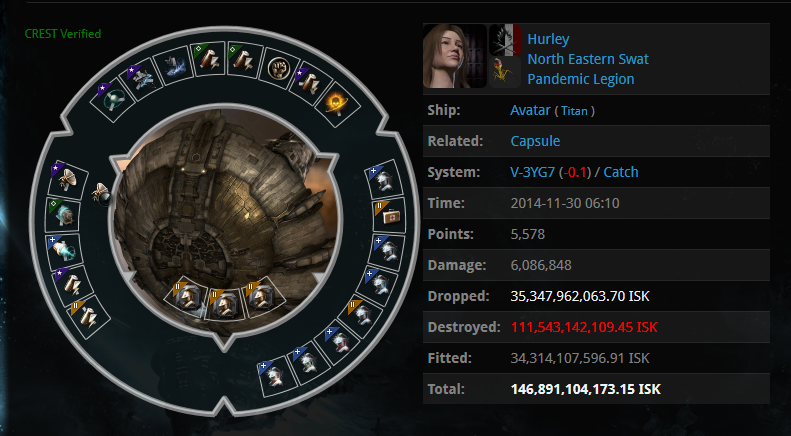 After also destroying a Chimera and Nidhoggur as well as a Sniggwaffe Vexor gang, a shout went out on Black Legion. comms. An Aeon supercapital was tackled one jump out and on a gate. The Ishtar fleet quickly warped and jumped finding the Aeon sitting just off the gate. The Ishtar fleet quickly engaged and began to kill him. Unable to jump the gate due to points that BL. HIC’s were keeping on him, he quickly lit a cyno however nothing jumped in at first. This left the Black Legion. fleet to slowly bump him away from the cyno, until eventually when help did jump he was too far off to be saved.

Much like the Avatar he soon popped leaving a shiny killmail. However not content with their kills so far, the Black Legion. fleet managed to take down another Archon before warping off, and then a third Archon was caught a jump out. 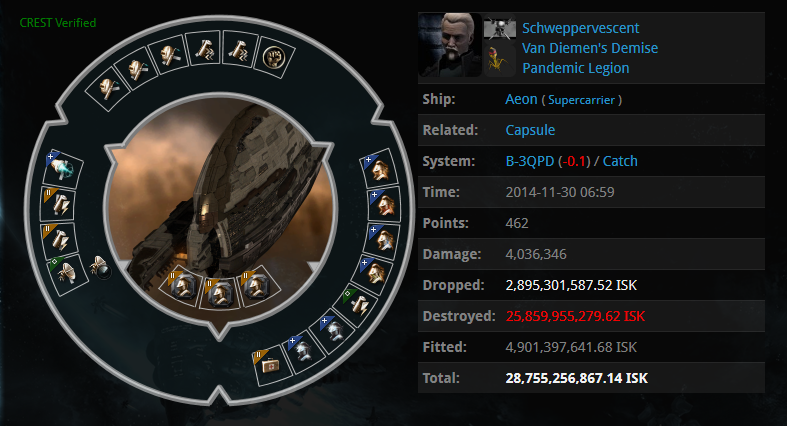 The titan pilot lost a 5 billion Isk pod which brought the overall loss for Pandemic Legion and Waffles to 211 billion Isk, having lost a tian, a supercarrier, several carriers, a Machariel fleet and a Vexor fleet.

A Black legion. prospective of the fight.

A recording of Pandemic Legion coms after the titan dies.

As a bit of a side note the person who managed to loot the wreck of the titan, Iymyrr D’Harun of Brave Newbies Inc. didn’t get very far. He ended up being destroyed by a member of his OWN CORP who was conducting bombing runs on the remaining enemy forces. Meaning that this Incursus went down with a killmail valued at just over 23 billion ISK.