Probably one of the most active of all the older alliances, Ushra’Khan is celebrating its tenth-year anniversary next week.

Created on the 25th November 2004, Ushra’Khan are a dedicated role-playing alliance who pride themselves as being the sword and shield of the Minmatar Republic and fight against the forces of the Amarr empire. Ushra’Khan formed from members of the old and informal alliance called ‘The Friends of Matar’ and was the among the first capsuleer created alliance in EvE Online, with Curatores Veritatis Alliance (CVA) being 3 days younger than Ushra’khan. CVA is the Amarr loyal alliance and as such have fought against U’K throughout their respective histories.

I sat down with DeT Resprox, who is the current CEO of Ushra’Khan and asked him 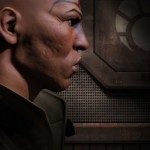 to give me a brief history of the alliance;

Ushra’Khan was originally formed by a group of corporations dedicated to fighting the Amarrian incursions, we originally embedded ourselves in Molden Heath, forming a coalition known as “The People’s Republic of Minmatar” who were primarily fighting corporations such as PIE Inc, Blacksheep Squadron, 1st Praetorian Guard and a few others, Oracle would go on to form Masuata Matari and Ushra’Khan was born, myself and others being the originals founders. A few days later, PIE Inc would go on to become the CVA. There would be wars across the systems from Molden Heath to Amarr as Ushra’Khan and CVA went hammer and tong against each other fighting for each others causes. These were the original corporations and alliances to be involved in such conflicts between factions.

In the early days, Ushra’Khan moved to the Great Wildlands, where we attempted to establish our first base in null (hence our Thukker historical connections). However, at the same time the great Exodus as it is known happened which, unfortunately, saw a lot of our number falloff. I myself chose to leave Ushra’Khan at this time and to take SMaK Enterprises directly to war with Sarum supporters long before she came to power. I came back to U’K during their fight to hold Providence. I lost a Machariel in an epic fight outside what was then Unity station. CVA would take the system and Ushra’Khan eventually moved to Curse/Catch. I again moved off (due to a number of reasons) and Ushra’Khan would then move to Faction Warfare – having seen none of the original founders were around anymore and seeing Ushra’Khan fighting once more for what it stands for, it felt good to be back 🙂

During it’s history a number of other well known alliances have worked along side U’K due to finding themselves united against common enemies. Groups like 0utbreak, who have historically excelled at the Alliance Tournaments, Ev0ke, The Establishment and Against All Authorities have all found themselves flying alongside U’K in the past.

I asked DeT Resprox what his number one moment within U’K would be;

The whole entire Karin Midular thing, where we spelt out ‘Freedom’ and placed a bounty on Midulars head – this put a monster wheel in motion, effectively seeing Shakor coming into power as we had wanted and setting up what we see today. It’s being a part of history of the backstory to the scene setting of the wars between Minmatar and Amarr which for me is massive. Escorting Shakor himself in order to unite the tribes was also highly significant In YC106, Midular called for the banning of the Khumaak, a grave mistake, the Khumaak carries a huge significance to the Matari. It was these moments that led to Uhsra’Khan ‘being.’

Starting on Tuesday night around 20:00 there shall be a fireworks display in Rens outside the Rens VI – Moon 8 – Brutor tribe Treasury. We also have a number of fleets which shall be in operation around the warzone. We have a mission to liberate slaves from Amarr itself. I also wish to make it clear, that any rumors about Ushra’Khan planning to attack CVA cannot be confirmed at this time. We shall be celebrating through the week right through to Sunday. Rens shall see celebrations on more than one occasion though

Anyone fighting against the Amarr is welcome to join any of our fleets, or on one of our null ops – in-game channel ‘Voices U’K’ is the place to be – or drop by Rens Tuesday 25th @20:00 to watch the fireworks 🙂

Live coverage of a lot of the anniversary celebrations will be streamed live through twitch, to watch this go to http://evepandora.com/ and click ‘live broadcasts’.