The Long March of the ClusterFuck Coalition

Large Empires were to crumble, the huge war machines were to grind to a halt, the well defined walls were to be defended and free ports were to be built. Phoebe watchers predicted this and more but someone forgot tell the major alliances.

Northern Associates (renter alliance) is bigger than ever, nearly rivaling the expanse of Amarr Empire itself. The CFC proclaimed they would pull back to vigorously defend the Fountain region in the south, because they saw the writing on the wall. Pandemic Legion sold off their conquered space, reducing their defensive commitments. ProviBlock and HERO signed a truce.

While everyone was shuttering their windows, the N3 Coalition and protectors of the Northern Associate area decided to do the opposite. The alpha alliance in N3, Northern Coalition. (NCdot) called in its corporate CEOs and directors to discuss the future. No one has reported what was said but the following days saw NCdot fleets dropping the hammer on Alliances in Stain, as well as a hole being punched into Fountains defenses. NCdot would not be content minding the home fires; they would instead be raising their pitchforks. 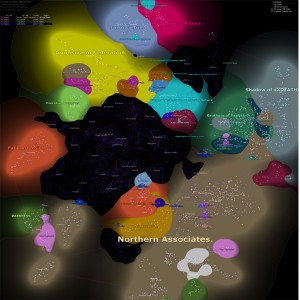 Vince Draken, NCdots main FC and figurehead, told his pilots that the attack on Fountain was payback for CFC’s Fatal Ascension alliance sending a bomber fleet to interfere with NCdot ops in the Stain area. The Navy Apocalypse fleet, along with some dreadnaughts broke CFC infrastructure in Y-2ANO – the border between Fountain and Delve. They attacked the station and reinforced it, setting up what would be a massive confrontation a few days later as well as dropping a number of SBU’s.

CFC figurehead, The Mittani had issued a vengeance proclamation, “Now the era of ‘defensive CFC’ is over. Vengeance is here.” Mostly directing the wrath at a constant irritant in the north, Black Legion.

“BL’s directorate has been begging and spamming for NCdot to ‘invade Fountain’ for the past week…We will purge Black Legion no matter how much they beg for N3 help…” – The Mittani, Goonswarm CEO Update, Nov 2014.

As the hour approached NCdot spammed pings to pilots guaranteeing action and to show up in force. The war drums were pounding loudly. The CFC were doing the same as they assembled over 700 of their pilots for a massive march to Y-2ANO, having moved most fo their assets to the north to attack the ‘irritant’ Black Legion. Goonswarm’s capital system is YA0-XJ which puts it 37 gate jumps from the Fountain- Delve front. A war march with that much hardware is a spectacular event; intoxicating for the pilots involved. Moral and resolve are high. Everything is funnier. Pilots sing.

On the NCdot HQ the war drums had completely gone silent. Nothing stirred. Long periods of silence occasionally interrupted by a throw away comment. A couple pilots exchanged views over the virtues of a certain ship module.

The CFC forces made it to Y-2ANO, stood around while a few pilots repaired everything, then jumped another 30-40 jumps home. There was no combat. No true invasion.

However, once they got back to the North, a portion of their fleet decided to see if their ‘vengeance’ could be satisfied. They formed a fleet and headed the the Black Legion. ancestral home of K3JR-J. Black Legion. formed up a 180 man fleet and decided to fight the 260 man CFC fleet head on. The resulting fights, which spanned 4 systems around K3 as well as the system itself, saw the head FC for BL. being head shotted by CFC twice and BL. losing a total of 12.4 billion ISK. However CFC didn’t have all the fun on this ‘hell camp’ as they lost a total of 11.7 billion, just 700 million ISK LESS than BL.

To add insult to injury, after the CFC forces had left Fountain and headed back north, an NCdot/Darkeshi fleet attacked and destroyed the newly laid CFC SBU’s as well as two CFC Dreadnaughts in Y-2NAO and 6 billion ISK in other small assorted stuff bringing the total to just over 8,7 billion ISK lost for the CFC. The N3 forces then deployed their own SBU’s for the second time this week.

Analysis
Nullsec is in flux. Players will only do a 70 jump round trip a few times before they tire. Ironically it was the Mittani that embraced “denial of fun” to the enemy as a means to wear them down. CCP assumes this ‘real-life’ jump fatigue will atrophy the former empires down to smaller and smaller spheres of control.

Mittani proclaimed the CFC would fortify and build a war complex like a true empire would. N3, with their Northern Associates expanse, is riding out the early part of the Sov changes by doubling down on conquest and renting. That model has not been challenged yet by any small or medium alliances so it remains intact, even if it still hinges on the N3 power projection.

The key difference between the CFC and their rivals, N3 and Black Legion, is the philosophies that they cling to: CFC accepts new players while N3 accepts only more experience players. NCdot (of N3) and Black Legion have mandated that all pilots create jump clones and reduce clone reactivation through skills – taking many days of dedicated training. This allows them to blink to a war zone every 18 hours through jump clones – avoiding long marches. The CFC would not put their young members through that requirement. That time is better spent getting them into better ships and skilling to be able to fit and fly them to a good standard.

The CFC also has two distant fronts, one against BL and another against N3/Darkness/Kadeshi which causes them to either make a number of jumps and then wait for their cooldowns or make a round trip of 70+ jumps in capitals/ supercaps and subcaps. NCdot has two close fronts against the CFC and Russian Alliances of Stain. NCdot can fight on their eastern front at noon, and the northern front an hour later with little forewarning or preparations made. While Black Legion are completely focused on the CFC and as such have no divided obligations.

On the other hand the CFC has a massive populace with first rate logistics and industry. If they ignite their factories, build capitals and supercapitals they will be able to reinforce their front lines with separate caches of ships and use interceptors to cut down on the travel time between hot zones. This would also allow them to weather any logistical interruptions with Jita, but may be very cost prohibitive, especially to their newer members.

The N3 rental empire is doomed, but as it has not being replaced by anything yet, that income keeps coming. Large coalitions may soon be a thing of the past, depending on new SOV mechanics coming in 2015. Time will tell if the CFC war machine will rise before the N3 break through or whether the N3 will pull back and allow the CFC to concentrate their forces against the smaller Black Legion.