For almost three months, both the newly born HERO coalition and the ProviBloc have struggled over control of the systems in northern Catch. The systems, claimed by Providence as a part of “Greater Providence” and part of the legacy of Sylph Alliance, have put them at odds against HERO, which has desired the systems as a part of their desire to exercise full control over the region, leading to months of bloody back and forth fighting between the two sides. HERO coalition, supported often by The Unthinkables and Northern Coalition. have grappled against Provi bloc, Stain Russians, and Pandemic Legion itself for control over these systems, especially over the system of ERVK-P in northern Catch, which has been the catalyst for most of the fighting over it, after Provibloc claims that HERO coalition reneged on their agreement to hand the system and station over to former CVA owners Corp 54 in the aftermath of Darkness of Despair’s implosion in late March.

Late last night, on October 26’th, head of HERO coalition and Brave Newbies Lychton Kondur dispatched a mail to the executors of many alliances in HERO, detailing the plans going forward for the coalition, which reads as follows:

As we prepare for Phoebe changes, we have had to take a hard look at our current strategic objectives and prioritize targets as such. For the past week and a half, our coalition leaders have tried to negotiate terms with Providence Bloc in order to ensure an uneasy peace as we both venture into the unknown.

Effective immediately, all hostilities against Provibloc sovereignty have ceased. We have agreed to enforce the terms of the original ‘Burn Catch’ diplomatic agreement and agree to not infringe on each other’s space, adhering to the current boundaries. As such, the northern Catch regional system belongs to Provi will not be contested by HERO any further.

2. HERO members will still be able to use ERVK-P as a “Freeport” type system. MORE INFO ON THIS SHORTLY

3. All Moons belonging to each Bloc are rightfully owned by said bloc. Provi system=Provi moons and HERO systems= HERO Moons.

4. We agree to remain standing-neutral but exercise the right to enforce a good neighbor policy and unite against common enemies.

5. Any violations between the blocs will be handled diplomatically to limit conflict escalation and to fix whatever broke down.

6. Both PROVI and HERO agree that our perspectives regarding our earlier treatice does not matter, and that both sides will honor and enforce the original agreement.

7. If at any time the Eve game mechanics require us to nullify this agreement, there will be sufficient advanced warning about terminating this agreement from either initiating party.

8. Understanding that spies and agents of malcontent may try to disrupt the terms of this agreement, a secure communication channel will be created between coalition leadership entities to diplomatically solve any potential issues that will arise.

There you have it. We are staying neutral, we can still fight fleets, but we are adhering to a good neighbor policy with Providence. I, along with the other coalition leaders will be doing individual Alliance-level fireside chats within the next few days to answer questions relation to the impact of this agreement. I must insist that any questions that involve our plans Post-PHOEBE will not be answered until we have a unified message in terms of our plans to address the larger game changes.

Tl;dr- Read everything, DONT REPLY ALL, also Provi leadership is cced to they know what the fuck is said. Drink milk.

All bolded sentences are emphasized by the article, not in the mail itself. 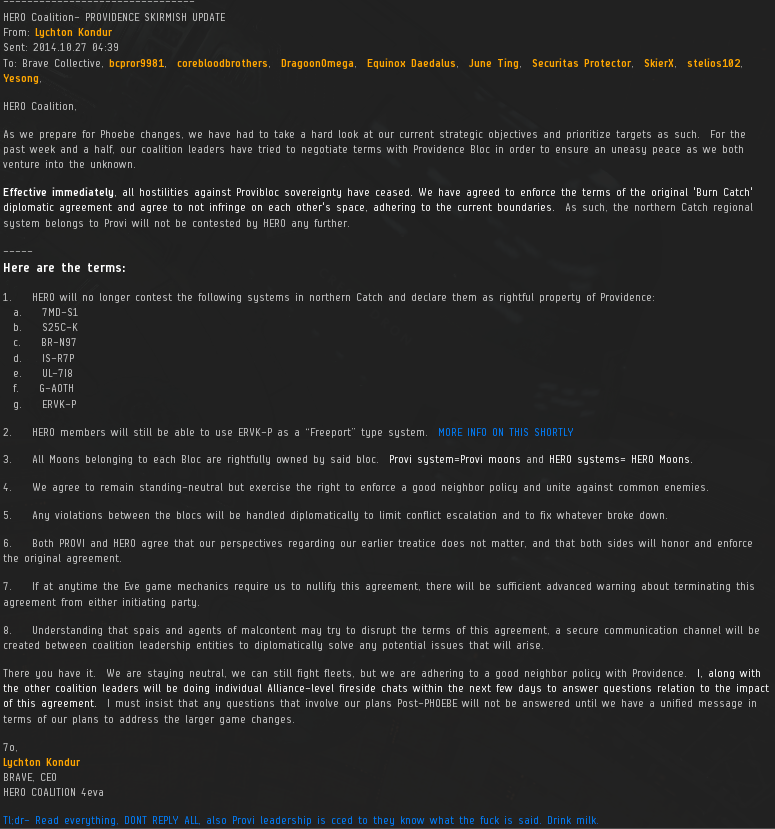 The agreement is an interesting one, considering the struggle and animosity shared by the two groups over the past few months, in part during the time in which HERO was moving in, and also while HERO was preparing for what was termed as ‘Manifest Destiny’ in the conquest of the northern Catch systems themselves. With the Phoebe shakeup changes coming soon, HERO looks to entrench itself in time for the winter as many Stain Russian alliances, including former Stainwagon leader Elazar Keon himself have vowed to see HERO removed from Catch and for Stainwagon to be reinstated to it’s rightful place.