I Used To Have a Titan, but Then I Got High *Update*

Afroman would be proud, The CFC have lost their second Titan in two months to Black Legion. And this time it was all due to a bad case of weed brain. Anyone who listened to the Black Legion. Alliance meeting a month or so ago would have heard how Elo Knight does not want his members smoking weed due to the effects of weed brain. Well last night the CFC decided to show us why.

Earlier that evening CO2 decided to drop on Out Of Sight. Who were busy reinforcing a POS with a few dreads. CO2 brought in two titans for a drive by, hoping to kill the dreads very quickly. However, Black Legion. got wind of this and decided to go titan hunting. So a quick tengu and shield HIC fleet was formed and bridged to HBD-CC where the CO2 titans were. Once they got there they found one titan was already out but there was still a single Avatar on field. He was quickly bubbled as the friendly Harpy fleet on field tried in vain to kill the Black Legion. tackle. Black Legion. dropped a cyno inhibitor but unfortunately literally 10 seconds before it online a cyno went up on the titan and in came a slow cat fleet saving the titan from its doom. Black Legion. killed the tackle around them and headed home.

Not an hour later Elo Knight gets a poke from a guy who has seen intel in the spectre fleet channel that a CFC titan has drifted 180km out of a POS in YA0-XJ Quickly a fleet of dreads and ghostriders were formed and jumped on top of the titan piloted by RedGreenBlue, he was quickly pointed and three volleyed by the sieging dreads leaving a juicy 125 Billion Isk Kill mail. Unfortunately for the siege dreads, this being one of the CFC’s home systems, they were quickly tackled although a few dreads and most of the ghostriders made it out alive. The CFC brought in their normal barrage of titans and supers to finish off the 26 or so remaining dreads very quickly under doomsday fire. 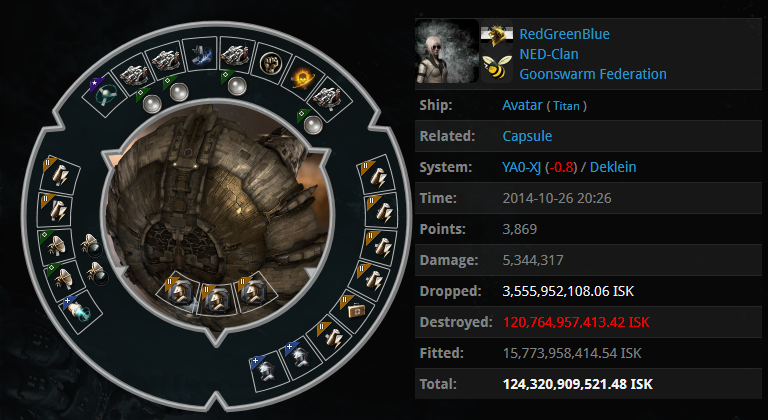 This time around there is no need for debating cost before and after insurance on suicide dreads, as even without insurance the Isk war was won by Black Legion. With the totals coming to 87 Billion Isk vs 146 Billion Isk lost. The story behind the titan drifting out the POS is hazy, but the excuse is that the pilot is a serious blazer who was so high that he lost control of his giant spaceship. Ironically the bounty payment to all the pilots on the kill was 420,420.00 Isk.

I received this story from the pilot who found the titan and and alerted BL to it himself, KanonKongen from Overload Everything;

“Just copy/pasting what I sent when tmc asked for info, even if mittens declined it since cfc = not alod worthy

So I got told there was a titan tackled in  YA0-XJ by BL, so of course I run the fuck up here to whore. Got in system, nothing but CFC everywhere 400+ local. So I decide just to warp around and scout titans, found 2 avatars both in pos’s, warping to a third.. and I notice he is moving.. slowboating outside of the pos shield..

CFC hq, must be bait right? Yeah thats what my alliance said when I gave them the intel when he had burned 40k out the pos, no hardners on whatsoever. around 150k-200k distance with him from the pos I decide Im going to batphone the fuck out of this, convo’ing PL/NC./BL etc etc fc’s all round but to no avail. All afk I presume. So I warp back, start working on warpins along the grid as he slowly moves, shoot him a few times because I had lost hope of killing him and didnt care if I spooked him.

And thats when Elo Knight accepts convo. My heart starts racing, I start shaking like a little girl.. This is pretty obvious by the way I am spewing the intel to him and he gets me to calm down etc and provide workable intel. He forms, I wait anxiously thinking every second he might come back from afk. “Warp back, and Ill invite you to fleet” he says. Heart thumping, I warp back. Feels like an eternity.. Having never killed a titan before, I was especially excited 😛

Was close, but some dreads did get caught. 25 in total but all plat insured (so im told) but kb greeeeeeeen isk war won right?