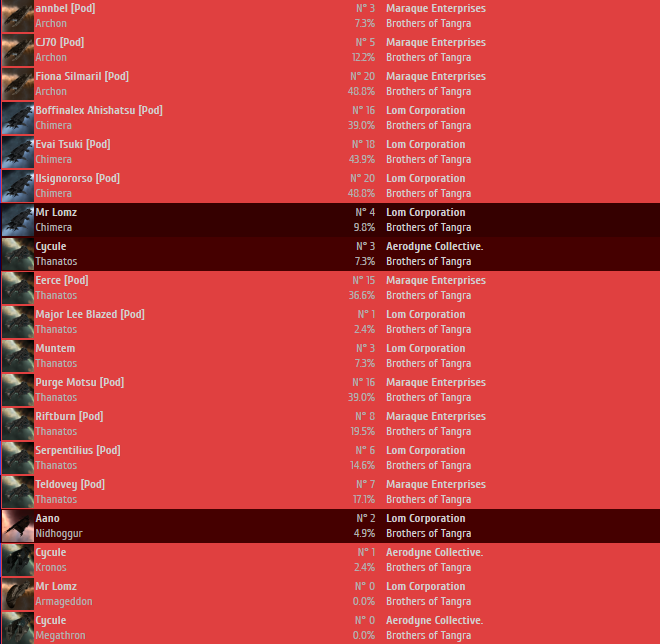 Monday night late EU time zone saw 13 Brothers of Tangra ratting carriers die at the hands of Black Legion. and several large wormhole entities including; Irresponsible Use of Capital., SnaiLs aNd FroGs, Lazerhawks and Arctic Light. The initial tackle was made by SnaiLs aNd FroGs [SN-FR] and AdAstra. [TCHEK], who were on a Interceptor roam FC’ed by Roynine Gainas at the time. It started off small with the Interceptor gang tackling a single mackinaw in an Ice belt, then escalated the first step when a Kronos warped in to try and save the Mackinaw who was then tackled himself. Snails and Frogs then began pinging a friendly wormhole channel and an Ishtar gang was formed as well as interceptors and dictors FC’ed by Ksig Cook. Sensing that the Kronos was now stuck a carrier was warped in to help it, of course resulting in the carrier being tackled too. As if one carrier wasn’t enough, more carriers were brought in to save the tackled Kronos and carrier. The Ishtar fleet arrived, and they quickly moved to engage the carriers which prompted several more carriers to warp in to try and save their captured brethren.

Black Legion. who were in an armor Augoror Navy Issue and Guardian gang, returning from a rather unsuccessful attempt at fighting Snuff Box received intel from friends that a wormhole fleet had managed to catch 13 carriers and needed help in killing them. Luckily a wormhole exit had already been found 5 jumps from Tartoken (Black Legion staging system) a short trip through 4 wormholes found BL in Outer Passage, and 5 jumps from the tackled carriers.

Black Legion. made the five jumps and then dropped fleet to join the wormhole fleet. The carriers instead of aligning had chosen to bunch up in order to keep within rep range, they were actively targeting and neutralizing all tackle in an attempt to drop the bubbles around them. Clever cap management from the dictors and the two hero hictors from BL. and True Exploration respectively, meant that bubbles were constantly up around the carriers. The tackling fleet attempted to target both carriers and a lone Devoter who was on field trying to help the carriers kill tackle, but were not able to break the mixture of shield and armor reps from the carriers. This meant that the fleet sat killing drones for approximately 20 minutes while dreads were slowly moved to help kill the carriers, the mixture of shield and armor reps from Scimitars and Guardians kept the tacklers alive.

The turning point came when the Black Legion. FC Zi’el Aubaris noticed that all the carriers were currently repping the Devoter and told the Black Legion. fleet to lock up one of the Chimera’s and conveyed the same message to the rest of the fleet who were using different comms. Once the whole fleet had locked up the Chimera the order was given to open fire and the carrier instantly lost a quarter shield. In the time it took for the rest of the carriers to cycle reps the Chimera was in hull and soon popped. It was at this time that Pandemic Legion Supers began to log in.

With the success of killing the first Chimera, the fleet continued to do the same for the other two Chimeras left on field. Sensing that their slow cat tactics where failing, all the carriers began to align out, but the bubblers continued to do a good job of holding them down. At this point the dread reinforcements arrived in the form of a Phoenix and Naglfar from Lazerhawks, the dread pilots dropped a cyno inhibitor shortly after landing which would turn out to be a very clever move. The dread and sub cap dps quickly made mincemeat of the remaining carriers, leaving 13 capital wrecks behind. The lone Devoter was then killed, revealing that he had taken 650k damage throughout the fight.

The Black Legion. fleet quickly extracted, while the wormhole sub caps stuck around waiting for the dreads to end their siege cycles. A cyno swent up on station and Pandemic Legion Supers jumped in. Due to the fact that the dread pilot had dropped a cyno inhib the supers could not cyno on top of them, granting precious time for the dreads to end their siege cycle and extract. By the time the supers were able to warp to the battlefield both dreads had already jumped out and the sub caps were able to warp off, leaving PL with dead renters and no killmails.

The butchers bill came in at 4 Billion Isk worth of losses, mainly in the form of tackle, for the wormholers and BL., with 42 Billion Isk killed including; 3 Archons, 3 Chimeras and 7 Thanatos as well as several sub caps who had attempted to assist throughout the fight from both BOT and Shadow of xXDeathXx, including the 2.6 Billion Isk Kronos, for BOT and friends. This could have gone down as simply a dead mackinaw. Instead it was escalated, but not far enough to save the BOT carriers and their support, resulting in the destruction of a lot of Isk.

An interesting aspect of this fight is that it showed just how powerful a tool wormhole movement can be, the Black Legion. fleet was able to get from one side of New Eden to the other very easily without using any form of bridging or jump drives. This could be an example of how wormholes may be a viable option post-Phoebe for large force movement without the side effects of using jump drives, bridges or portals. This method of force projection is not without risks, however. On the return trip one of the wormholes reached its mass limit and was closed, meaning the Black Legion fleet had to wait 10 minutes or so for a new wormhole home to be probed.

I was asked by one of the Snails and Frogs Directors, Kashkaisha, to add in his feelings on bubbles. He feels that while even though bubbling helped them get the kills during the fight, that it is currently overpowered and should be nerfed by CCP. He also went on to say that anchorable bubbles should be removed or result in a killmail like any other anchorable structure.

A video taken from the perspective of a Lazerhawks dread.