The Cosmopewlitan: The Day Nullsec Cried.

Two days ago I asked a friend that if a genie were to offer him a single wish to change null SOV radically, what would this wish be? His response was more of a daydream than a viable answer:

You would need to reduce the light year distance a capital can jump in a day. Similar to jump clone time limit thing. Say fortyish light years per day or something along those lines. The result? Wham! You can no longer defend all of space.

I mention this because I nearly died of a stroke when I read CCP Greyscale’s DEV blog, it was show-stopper.

Nobody, but no-one expected this. This is one of the key changes Null-Sec and EVE Online as a whole needed. One that for years, many players dissed as too controversial to happen. And the announcement certainly controversial was; with the obligatory 2,800+ responses threadnaught on the EVE-O, a 1,200 replies reddit post and countless of #tweetfleet interactions. But this could also be one of the most influential changes to EVE ever.

“Whenever a mechanics change is proposed on behalf of ‘new players,’ that change is always to the overwhelming advantage of richer, older players.”

In this case, the players most affected are, of course, the capital and super-capital pilots. In fact, new players won’t feel the direct impact of these changes unless they commit to an SOV holding alliance.

For many years, players have debated how to reduce the impact older players and older alliances can have over newer players and smaller alliances. All this without trashing years of skill-training. The sad true is that neither Dominion nor the endless chain of nerfs capital and super capitals ships suffered during the past years achieved enduring changes. Yes, the super-cap fighter nerf reshaped the null-sec political map as it did the Titan Tracking nerf, but this one seems to address the issue of giving the small guy and newer alliances, an actual chance.

While many CFC, PL or NCDOT players have deluded themselves saying how “caches of ships” will be spread all over their vast areas. The truth is it will be much harder for alliances to exert their influence over broad expanses after the tweaks take place. For example, with a system like this I find hard for a Pandemic Legion or to fight several timers per day in distant regions utilizing their capital prowess, unless they split their forces. Nor players will get to sit hours at range from a titan on their home system to overwhelm their enemies when the timer hits zero, as it has typically happened for years. For large alliances, deployment now will mean something else than five jumps from home and the new logistics challenges that these changes poses do limit the amount of distance a coalition can actually project their force from home.

It will be harder to defend space you don’t live in.

Talk about occupation, right? For example, right now as things stands a large coalition, for the reason that be, stages itself at Maila (the Forge low-sec). It takes them five jumps to relocate to a considerably distant system in the map, let’s say the Khanid region. This is 100% doable with a proper cap chain nowadays, all within an hour.

With the new proposed changes, the same trip would take fourteen jumps. On top of that, it’d be near impossible to wait for the fatigue timer to wear out. (128 years according to this alarmist document). While I expect the timers to have a cap at a maximum, it doesn’t change the fact that CCP GAMES want you bite the bullet and take the gates. More carefully planning will go to gate-to-gate navigation. Utilizing those new-precious jumps for either, taking the final leg of the trip (hot dropping) or to shortcut thought those large voids in the New Eden Map.

If the system sounds uncomfortable for those of us used to blitz through several regions within minutes, then you need to understand that this is how the system is designed to work.

I find difficult for mega-coalition rallying pilots back and forth from the far reaches of its conquered regions to defend simultaneous invasions at several fronts. On the other hand, the individual alliances that conform said coalitions will have to show up what they are made of by defending the space they live in. But the spirit remains, to make large scale engagement once again an affair between Fatal Ascension and Black Legion and not the CFC vs. Black Legion to give an example. And if reinforcements are to be called, gate travel will ensure tons of “content” for opportunist campers preying on regional gates.

Everything old is new again.

Make no mistake, the proposed changes will not tumble the current vast null-sec empires overnight, but it will make them defend them a diminished returns enterprise, especially after the attrition factor kicks in. But it also will be a trial by fire for the current coalitions to improvise, adapt and overcome the challenges ahead. Something these large entities have managed to overcome over the years.

The impact in rental empires is another one yet to asses. Also, it will be interesting how much tolerance will broad coalitions, have with smaller entities currently stationed in NPC null should they decide to take a small chunk of space near their renter empires. In many cases, evicting these entities will be an inefficient enterprise.

To the players saying that these changes are “un-fair”, I must remind them that they affect every single large coalition, not just they one they are in. Newer players now have a glorious opportunity to taunt older players how they should “harden the fuck up” and smaller alliances can now tease larger coalitions on how they brought this onto themselves.

This is the first step.

Yes, the first step but a radical one. The response has been quite positive, at least from my side. Having the former CEO of a five thousand null-sec coalition describe this announcement as a “Game Changer” is something impossible to ignore. Nor is to see players siding with CCP Games in a show of support for the need of these changes.

Let’s hope CCP Games stay the course in their plans to make null-sec more dynamic place to live. Even today, for many of the newest players and alliances null-sec, is their current end-game.

To the dissenting CSM’ers and the so-called null-sec dealers, this is a clear statement from CCP Games that they are the ones in charge, as it should be. This is a change the game has needed for long and the folks at CCP Games are entitled to make changes as they see fit for the long term benefit the game and not a few SOV holders. And with this I am more than OK. I made a quick non-scientific twitter poll and the players seem to be in favor of these changes. Finally, I am happy to hear the DEV are also receiving this very same positive feedback: 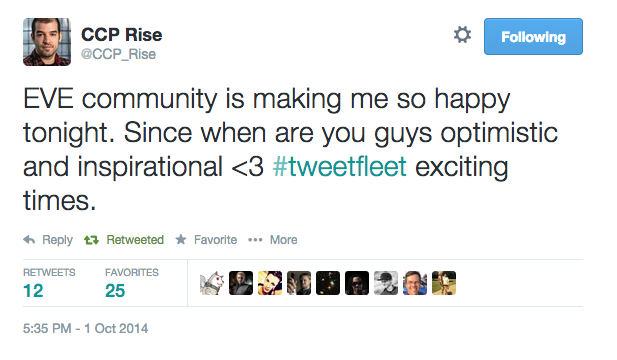 I hear there are panic firesales in the character bazaar, that there are already talks of an strategic land grab war about to break soon, that people are being advised to move their carriers out of deep null pockets before the same move turns into an uncalled headache. And that there are rabid players threatening to unsub over this change. The truth we are just starting to feel the impact of these proposed changes already. A lot of players are optimistic. I know I am, it almost makes me want to re-sub, if only I wasn’t subscribed already. 🙂