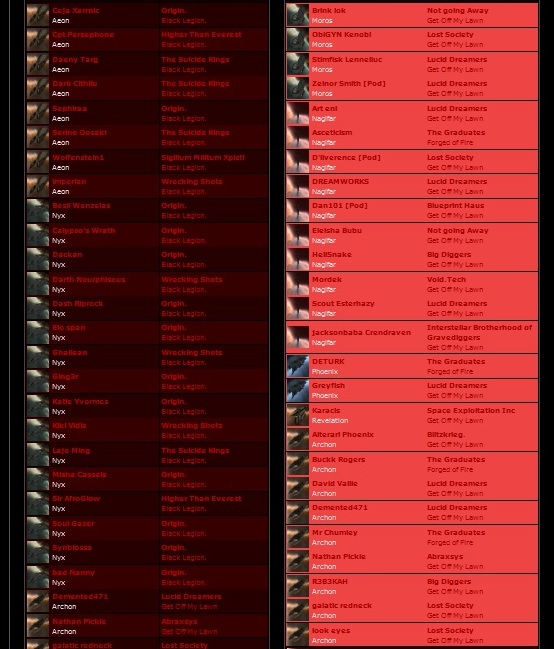 Early Wednesday morning, CFC alliance Get Off My Lawn were busy reinforcing a player owned starbase (POS) with a capital fleet when things suddenly went wrong. It started off as a normal structure grind with LAWN forming up a capital fleet of dreadnoughts and carriers. Unbeknownst to LAWN, Dangerous Voltage, whose tower LAWN was sieging, had been blue to Black Legion for some time.

When the call came from Dangerous Voltage that their tower was being hit, Elo Knight, Black Legion’s main FC, quickly called for all Super Capitals to login. Black Legion rage formed a fleet of around 25 Super Capitals and prepared to brawl. Dangerous Voltage warped in Heavy Interdictors and bubbled the LAWN fleet. This alerted LAWN that something was up and they managed to jump out a few dreads and carriers before the inevitable cyno went up.

As the Dangerous Voltage HIC’s light their cyno in streamed the Black Legion Super Capital Fleet, and the fight was on. Unfortunately for LAWN, the dreadnaughts were now out of siege and they faced a choice; re-siege and guarantee death in an attempt to take down a Super Carrier with them, or stay out of siege and hope they get lucky and are able to jump out. It soon became obvious, however, that the fight was only going to go one way when the completely bubbled capital ships began to explode in quick succession. 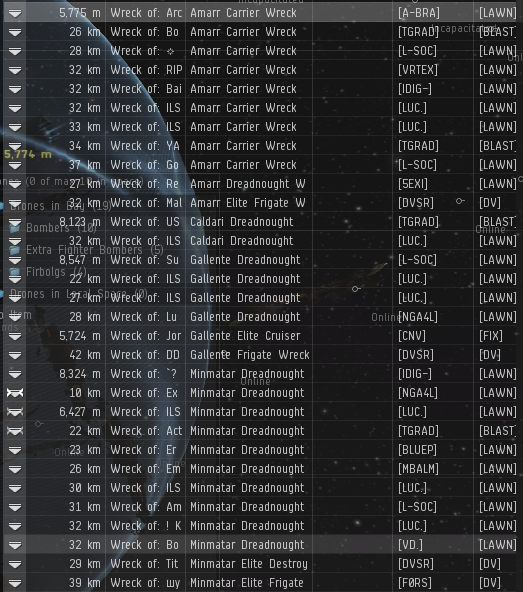 All accounted for Black Legion Killed: 9 Archon, 4 Moros, 10 Naglfar, 1 Revelation, and 2 Pheonix. With the total loss coming to around 70 Billion isk.

When asked for a comment, Eingang Vulpine LAWN’s Head Diplomat had this to say, “What can we say but ‘Whoops?’ We’re still mourning the loss of our capitals and reviewing the aftermath. Hat tip to Dangerous Voltage for use of the batphone.” 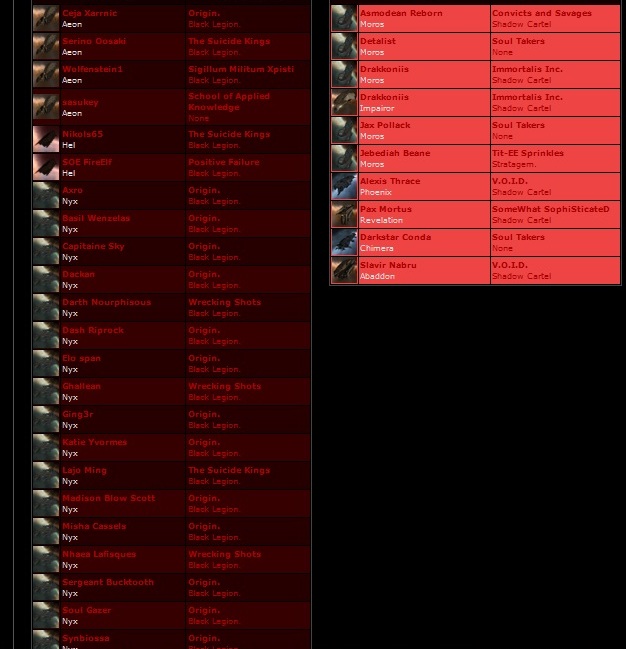 This was not Black Legions first mass capital extermination in the last few days. On Monday morning they used an Aeon Super Carrier to bait out Shadow Cartel. Knowing that Shadow and their friends Soul Takers had recently killed a Nulli Secunda Titan and would be confident, Black Legion left an Aeon vulnerable and waited for the trap to spring. True to form Shadow and Soul Takers cyno’ed in on the Aeon and attempted to kill it. This only resulted in Shadow Cartel losing 5 dreadnoughts and a Carrier, with the Soul Takers also losing a Dreadnaught and a carrier to the Black Legion Super fleet as well as a Tengu support fleet.