The universe of EVE Online is growing larger every day. More players are signing up and creating Trial accounts to see what it is all about. “One Universe to Explore and Conquer.” With this large influx of players, CCP went ahead and started simplifying some things within the game. A good example would be the ISIS system. However, all these extra’s lack something that CCP just cannot provide (although they try). They lack the guidance of experienced players. Nothing can trump the advice of a player who has been playing for years and knows his field in and out.

So we start the first guide. Before we start looking at the wonders of mining, complexity of industrial construction or pretty explosions of PvP and ratting, we first need to ask “What is EVE Online?”

The list goes on. So, grab your towel, stick out your thumb and let’s get started with the basics. 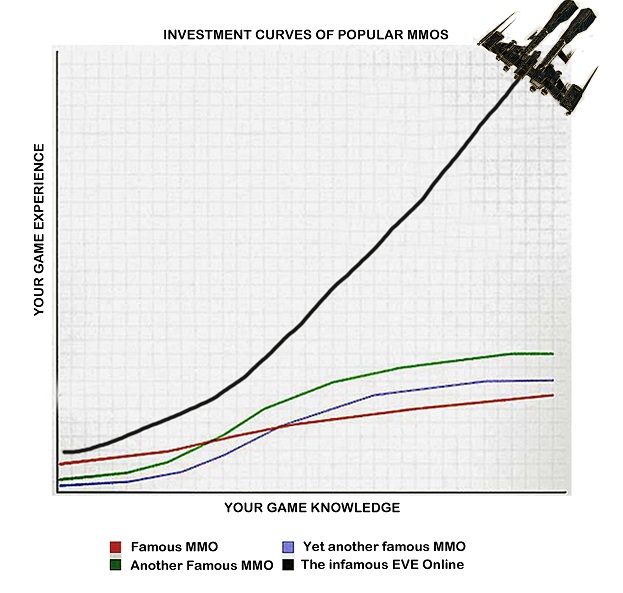 What is EVE and what is your goal?

When you start EVE, you first create your character. This character is a capsuleer. He punts around in a mini ship called a pod. Inside the pod he is suspended in a quantum fluid, hooked up to cables, allowing him to control the ship with his mind. This is the capsuleer advantage. This makes him better than an NPC. This pod is able to plug into many, many ships, allowing the capsuleer to control the ship with their mind.

And this leads to the goal of the game. Get yourself a ship. A ship that you want to fly and one that you enjoy flying. Each race (Amarr, Caldari, Gallenete and Minmatar) has their own rookie ship that is given to a capsuleer from their race should they dock at a station without a ship. This is the ship you start with and the one you will eventually find disposable (No value if it’s free right?). This rookie ship also comes equipped with two turrets. One miner and one gun. Now that you have what is needed to get started, there are 2 things you need to do to progress in EVE.

Almost everything in EVE requires skills, whether it be skills to mine more efficiently or skills to make your weapons hit harder. Training in EVE requires skill books and time. Your character starts off with some basic skills. To train every single skill in the game would take well over 20 years. As CCP releases new expansions, new skills will be added, extending this time even further, so there is no hope of being good at everything with a single character. Instead, look into what you want to do. The type of career you want to follow will determine which skills you should focus more on. Now that you know what you want to do, you need to get the skill books. Skill books are purchased from academy stations all over the EVE universe. To buy them, you need ISK.

Time to earn a living

ISK makes the EVE galaxy spin on it’s rotational axis. ISK is the currency of EVE Online. It is used for everything, from purchasing that ship you want, to paying your taxes. Within EVE, there are different ways to earn ISK: Mining, selling items on the market, shooting rats (NPC ships), market trading, Planetary Interaction and many more. To balance this, EVE has just as many ways to lose ISK and these include the loss of ships, scammers, taxes and system rent. Since you are new to EVE, you would start with some of the easier methods. Your rookie ship already has a miner on it, so you could go and lazor some asteroids for their ores. Or you could go and shoot some rats for their bounty with that civilian gun of yours. Either way, you are going to need the ISK to keep pouring in so you can buy what you will need.

A ship dressed to kill

Purchasing a ship on it’s own is useless. All you are buying is a hull. Like the outside shell of a yacht, without any lounge suite or satellite TV. We need that TV now. On the market, you can also purchase modules. Each ship has 3 types of slots to place modules.

– High Slot: Used for your most power hungry systems. These would be weapons, mining lasers, missile launchers and all things powerful.

Then you get Rigs. Rigs are permanent modules that you duct tape to your ship. Unlike modules which you can swap and change, rigs are destroyed if removed from a ship. Rigs give bonuses to different aspects of a ship whilst imposing a penalty to another area of the ship.

For the new player, each ship produces 3 types of power:

– Powergrid: This is the constant power the ship can provide. All online modules that require powergrid reserve a piece of what the ship can offer. A module that needs more power than the powergrid can offer will not be put online.

– CPU: The processing power of each ship. Many modules require intelligence behind them and the ships computer provides that. But the ship can only do so many calculations per second. If a module requires more than what the ship can offer, it will not come online.

*Some modules do not consume capacitor, but consume charges instead (ammunition).

Based on all this knowledge, you can start looking at modules and choosing what your ship will need. Keep in mind that certain modules are restricted to certain ships. We wouldn’t want a mining barge running around with a doomsday weapon would we? (Obviously a mining barge can’t support a super weapon. It lacks the powergrid, CPU AND capacitor to use that module)

Now that you know some basics on EVE, I will be working on future articles that will hopefully help the new player with different aspects of EVE, like mining, Incursion, exploration and mission running. No, I’m not only going to do articles on those. If you have a suggestion on a sector of EVE I could cover, let me know. If you have any helpful links, post them below.