This morning, a Solar nyx decided to go out and fish for some juicy ratting carriers. He prepared an Interceptor with a cyno to tackle the carriers. The interceptor is a good choice because they are now invulnerable to bubbles, fast enough to get on top of a ratting carrier and fully fitted it costs around 35mil, making it a perfect candidate for this job.

His interceptor started flying around Pangu Coalitions ratting area’s and sure enough he found a ratting archon. He warped his interceptor to the anomaly, burned to the Archon, tackled it and lit his cyno. His Nyx jumped in and quickly secured the kill (Archon Kill). After he killed the Archon, he quickly got safe and jumped back to his POS. While getting his Nyx safe he noticed that his cyno interceptor survived. After killing 1 ratting carrier he got excited and quickly started preparing for another run.

Pangu Coalition noticed, that after he killed the Archon, he didn’t log off so they quickly decided to go for it. They thought that he would try it once again, so they fitted a bait Thanatos. The Thanatos started to rat to act like a normal ratting carrier and sure enough the nyx pilots interceptor landed. The Thanatos was pointed and quickly the interceptor lit his cyno once again. The Nyx landed, which meant that it was time to go, Pangu quickly moved Hics and Dic’s on top of the Solar Nyx while N3 + PL sent pings and started forming.

N3 and PL were already formed with a Proteus & a Dread fleet with a super fleet on standby. The Pengu Thanatos lit his cyno and N3+PL quickly jumped in to secure the kill. 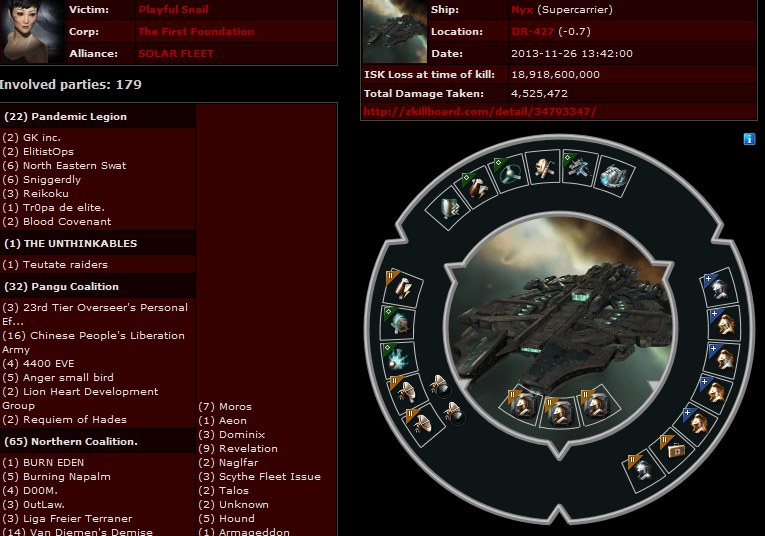