Rubicon is giving us some new modules to play with, one of which is The Small Mobile Siphon Unit. This unit is designed to steal from a tower that is moon mining, or doing simple reactions. It can be used to make a profit or grief.

1 Small Siphon Unit is 35m3, this means a agility fitted Blockade runner can carry around 100 units in their cargo holds. build costs are 11.4mil roughly and predicted sell price per unit will be around 12mil to 13mil.

They must be dropped in range of a POS, and cannot be within 10km of another Siphon Unit. POS guns will not automatically fire on these units, much like Mobile bubbles, or cans, unless a player actively uses the POS guns to shot the siphon units.

Once a Mobile Siphon Unit has been deployed, it cannot be rescooped, it has a lifetime of 30 days, and will continue to Siphon from a POS until it is either destroyed, or its cargo bay is filled. Note that anyone can take from the Siphon Unit.

Usage:
A harvesting POS mines a 100 units of materials every hour from a moon. If you deploy 1 Siphon Unit this will result in the Siphon Unit stealing 60 units from the POS, of those 60 units only 54 will end up in your Siphon Unit because of the 10% waste. If you anchor a second Siphon unit then it will steal the remaining 40 units, 10% waste means you get 36 units, However this will mean that the tower itself will receive 0 units into a Silo, as everything would of been stolen. You can deploy more than 2 Small Siphon Units however Units steal in the order they are placed, and any units after 2 will have no materials to steal.

A simple reacting POS produces 200 units of simple materials every hour from a reaction, 1 Siphon unit would steal 30, and receive 27 units after the 10% waste, a second unit would do the same. It would take 7 Small Siphon Units to shut down a simple reaction tower. 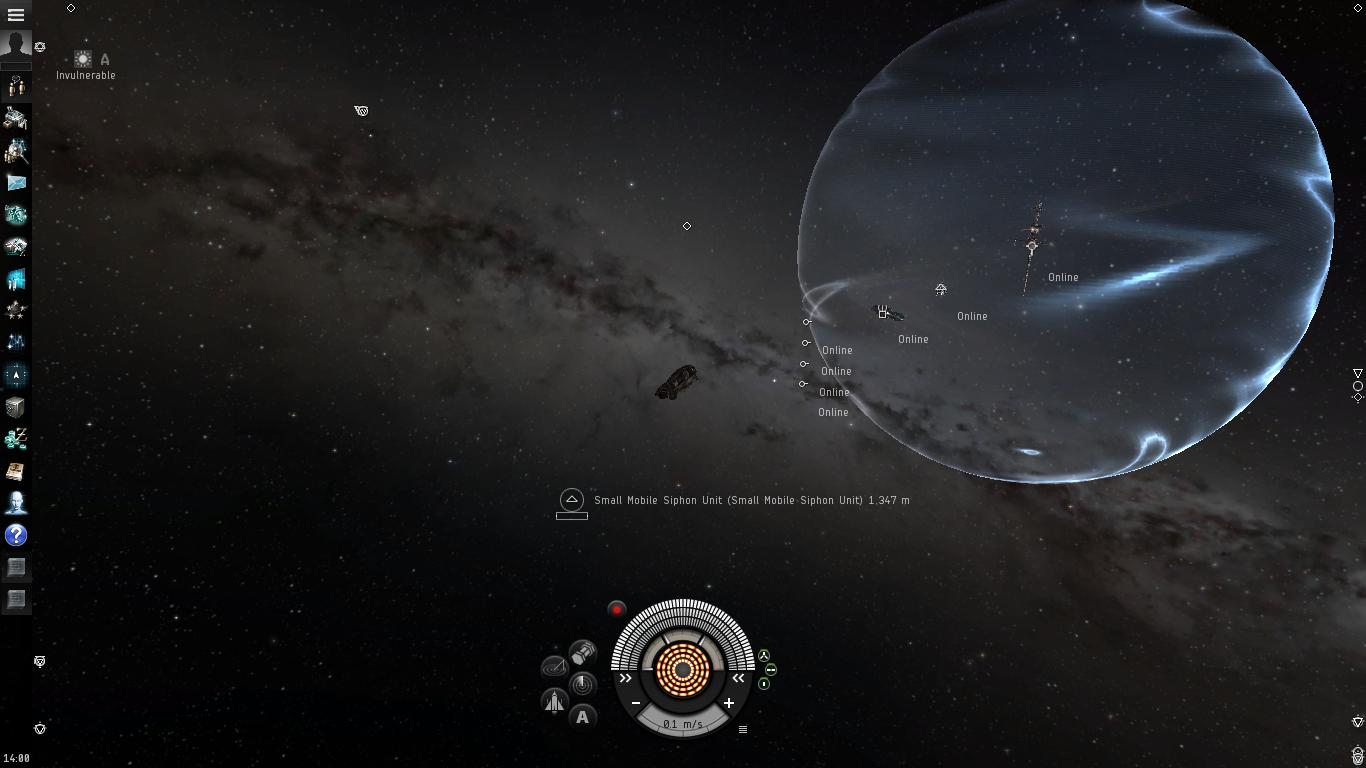 Isk making / Griefing tool:
Come Rubicon there will be a lot of demand for Small Siphon Units, some people will be looking to get rich, others looking to make people poor. It will take around 5 hours with the highest value moon material, to cover the cost of the Siphon Unit, and anything between 6-8 for the other r64 moon materials, anything after this, if successfully scooped, would be counted a profit. r32s will generate less income, and more time to cover costs, however they will likely be less contested. Realistically however, certainly for the first month, Siphon Units will not make you rich, people will be far too active after the patch.

If you are looking to make ISK however, you are probably better off aiming for Simple Reaction towers, these towers tend to be left for much longer periods of time, and certainly in low sec, are run by small or single pilot entities. Finding a tower making Neo Mercurite would be very lucrative, and you would cover the costs of your Siphon unit in around 10 hours.

Griefing however is a very viable option, something that will undoubtedly be used by coalitions to disrupt and financially ruin other entities in the game. In a single blockade runner, you can have around 100 Small Siphon Units, this will cost you around 1.2 to 1.3b, depending obviously on the market price. 100 Small Siphon units would be able to stop 50 moons from getting any moon goo per hour. Most regions have around 30 r64 moons, some as high as 60. So for a small investment you can shut down a regions income.

Now, you can easily kill these Small Siphon Units, either with a fleet of ships, or a small gang, or what is likely to be the most popular choice, a POS gunner. However, in destroying the Small Siphon Unit, you will destroy anything inside if you don’t scoop the contents. Scooping the contents could prove to be a challenge, a well setup black ops team could easily wait for a hauler to come and scoop the contents and drop a small gang of bombers and recons and kill the hauler. Given that 95% of r64 towers are fully hardened towers with no guns, you can drop on a tower with almost 100% safety, obviously everyone should be putting a few guns on towers, but we know there will be many who don’t.

Once the Siphon Unit is dead however, you can simply redeploy another set of Siphon Units. So unless you are scouting your moon 24/7, or have pilots very active, its likely you are going to lose moon materials.

Larger alliances, or even small griefing entities will commonly drop a few SBUs to get a reaction, or a fight, they are more than happy to throw wasted money at these things. Now imagine what will happen with things that are 1/10th of the cost. We fully expect to see many 10s of billions being used to shut down other peoples moons.

Predictions:
We predict that the number of Small Siphon Units deployed in the first week of Rubion will be in the 1000s, given how cheap they will be, 11.4b build cost, likely starting at 15m to 20m on the market, before settling at around 12-13m, you will see most people giving Siphon Units a try. Low sec moons will be harassed highly by pilots and pirates in the area, who up until now haven’t been able to do anything against the big entities holding the towers. As for Coalitions, we fully expect to see huge investments into harassing moons, with the yearly southern winter war starting again, its very likely N3 will be hit the hardest with these units. POS guys all over EVE will literally be having breakdowns!

Market wise, we will definitely see a rise in moon material and reaction costs, which in turn will effect T2 production. Overall this shouldn’t harm the individual pilot too much, an extra 15mins ratting should make up the difference. However Alliances and Coalitions will feel a fair bit of pain, with less income, and more costs for things like Ship Replacement, not to mention the fleets required to clear these things constantly.

Looking even further ahead, its likely many r64s will be given up, most likely these will be the undefendable moons in low sec areas held by large 0.0 entities. Its very likely r64s in rented systems will be rented out to the people renting those systems, this way alliances still get an income, but do not have to care for the towers.

Long Term:
CCP have stated that they wish to add a Medium and Large version of the Siphon Unit, these would be able to pull more materials with less waste, with bigger cargoholds, and possibly able to steal from other POS, such as advanced reactions, gas processing, alchemy and booster making. Obviously Small Siphon Units are here to test the waters, and see what happens.

Conclusion:
Small Siphon Units are going to make or break alliances, they have the ability to financially effect alliances in a big way, however they will be most likely used for nothing but griefing, sadly for the little guy, unless luck is on your side, you are unlikely to see major profits to buy yourself that dream Titan. But, this does give a slight boost to mining, PI and those who are into production and market warfare. Overall these are going to be an interesting addition to Eve Online, and will no doubt suprise us all with the long term effects.

Thanks to those who contributed!

Will you be investing in Small Siphon Units, who will you be targeting, and do you aim to Grief or go for profit, let us know in the comment section below!