EVE Vegas 2018’s Opening Ceremony second hour was dominated by a 4 pack of Mercs playing a Pre-Alpha Project Nova. While the EVE Vegas Schedule has a two hour block for Project Nova, an email sent out on October 3rd gave us earlier details, or at least to DUST 514 players. If you missed it, checkout TheDuck‘s article, UNDER A LAYER OF DUST – MAYBE 514 LAYERS? 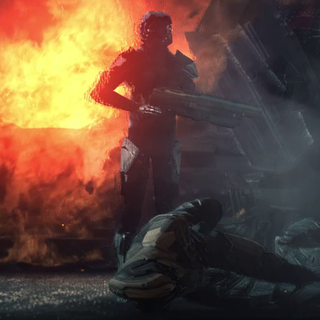 EVE Vegas 2018 attendees are already Registered for the “Invite-only Alpha,” should you not be lucky enough to be at the event click the image above and get in!

Project Nova – What is it?

About an hour into the stream CCP switched to a Pre-Alpha Project Nova gameplay presentation. Four players, two CCP staff and two EVE streamers, work together to capture charge points and fight off waves of AI enemies, Sansha True Slaves. Mercs were fighting on a Maelstorm Battleship hull with Sansha Nightmare Battleships circling. CCP presented three dropsuit options, but talked about more in various stages of development. Weapons like Shotguns, Flamethrower, and Grenade Launcher were talked about. PVP was mentioned, but no details were given.

While pilots have commented about Project Nova’s strong similarities to Warframe, a PVE FPS game, a CCP dev talked about how the levels are procedurally generated. Procedurally generation was a heavy buzzword 18-24 months ago and with No Man’s Sky we saw how it didn’t guarantee fun gameplay. It will interesting to see how this added random factor leans itself to minimizing the stale factor of PVE FPS games.

During DUST 514 rein there was a fair amount of talk about fighting battles on or in the ships of New Eden, Project Nova developers must have had a similar wish or listened to the community and the Onslaught Mission is fight on the outer hull of a ship, it this case a Maelstrom.

The idea the ship your fighting on goes to warp is a great way to connect Eve and Project Nova, while providing an interest finishing timer mechanic.

Project Nova saw Closed Socket issues near the end of the gameplay presentation. That was also the case for the twitch stream, as at the beginning there were nearly 4.8k viewers and as the Project Nova footage continued over a thousand viewers turned off. What do you think? Don’t forget @evenews24 is on twitter, hit us up with #EVENews24.