Kirith Kodachi: Dipping into the Abyss

I finally got some time to get into the new content last night and I snuck into EVE and prepared to go Abyss diving.

First off what ship to use? I had a slew of old ships in the hanger but since I used to run level four missions way back in a railgun Rokh, I felt nostalgic and grabbed an Eagle I never had a good use for and refit it for diving into pockets. 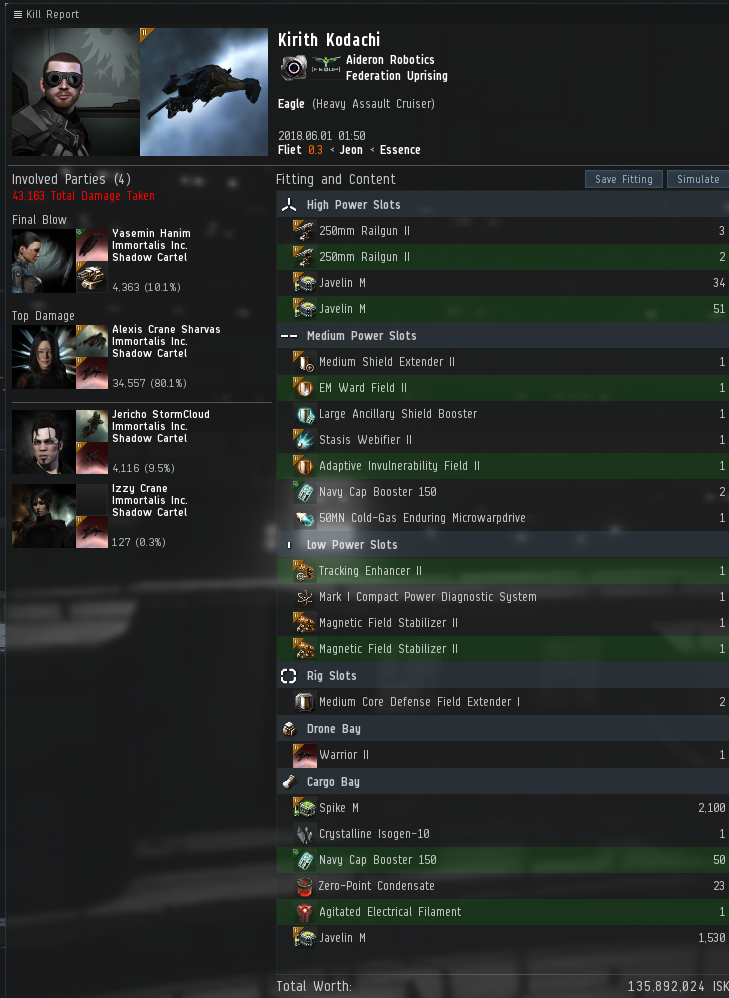 We’ll talk more about why its a killmail later.

The ship has a decent shield buffer, a booster for emergencies, optimal range around 44 km with antimatter. Judging on what I read it was vast overkill for tier 1 and 2 pocket rats, but I didn’t want to go too small at first since I’d done no diving on Singularity.

I went on the market in Dodixie and paid a heavy price for 5 Calm gamma filaments. These types of pockets were tier 1 and gave a boost to ships’ shield strength. I wasn’t taking any chances here.

I did my diving from low sec (since I can’t go safely into high sec, natch) and did five dives. Lost some drones here and there as I learned about the structures that automatically targeted “rogue automata” and a couple times activated the shield booster, but for the most part I had no trouble at all in the sites and completed them in 10-15 minutes easily.

In five sites I picked up 6 more filaments, three calm (tier 1) and three agitated (tier 2), some Cystalline Isogen-10 and Zero-Point Condensate used in manufacturing of the Abyss ships and modules, a Medium disintigrator (cool!), and three Decayed mutaplasmids (which is the lowest quality of four types), a medium shield booster, x-large shield booster, and a small shield extender.

On the return from the fifth dive, there was a hostile Magus waiting for me. And to make matters worse, there was a null sec fleet going on and I didn’t want to call for help to distract from that null doing important things. I tried to give the Magus a run for his money by targeting his drones and after a while he was running low on them and I knew he would never break my tank at this rate, but I also knew I had no chance of shaking him off or killing him and I wasn’t going to call for help. He, however, had no issue calling for backup and two battleships arrived to finish me off. Oh well, #SpaceRich.

Back in station, I decided to use the mutaplasmids to see what I could build: 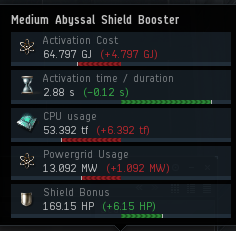 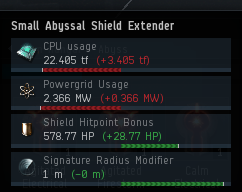 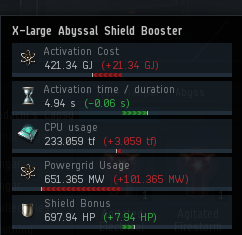 The Medium Shield booster turned out nice, small shield extender is a bit of a bust, and the X-Large shield booster got really hit hard in the powergrid usage department for modest gains in performance.

Overall I had fun, and plan to run some more once I get a new ship ready and get an alt equipped to back me up for when I come out.

We are proud to bring you the stories, opinions and musings of a long time pilot who has dabbled in everything New Eden has to offer, he writes and podcasts about his opinions and adventures at Ninveah.