Battlefield Providence: A Look at the Eight Factions Fighting in Providence

Since CCP dangled the golden carrot of faction Fortizars, power blocs have been looking hungrily at the most densely station-populated region in all of Eve: Providence, the homeland of Provi-Bloc. Home of stubborn defenders that have laid claim to the region for over 15 years, people that have outlasted empires and numerous wars throughout the ages. Their wars have made Eve legend and history.

The defenders of Providence have been under siege. They have had over a year of constant warfare followed by a massive invasion of Pandemic Legion the past 5 and half months. The proud warriors of Provi-Bloc fell back mostly to Low Sec while pockets of resistance maintained their presence in Providence.

Currently, a renewed Provi-Bloc has once again launched into their homeland and have taken up the offensive, regaining most of their sovereignty. They are currently basing their new capitol out of ZT. The Southern lands of Providence suffered the least devastation from the Pandemic Hordes, so many of the citadels are still there. From the South, Provi seeks to reclaim their beloved homeland.

Pandemic Legion and its allies have been able, after 3 and half months, to successfully force the bulk of Provi-Bloc fall back. They had entosised almost every structure in Providence and owned half of the sovereignty. With the invasion of Legacy Coalition alongside the renewed efforts of Provi-Bloc, Pandemic Legion has been in a state of retreat. Not since the grave loss Pandemic Legion and allies suffered while fighting Legacy Coalition in D-G have they attempted a capital battle with the TEST-led coalition.

Pandemic Legion was bolstered by Northern Coalition. (NC.) NC. has recently surrendered to Provi-Bloc, and in return Provi-Bloc allowed NC. to have their Fortizar unanchored unmolested in Misaba. These terms were accepted by NC. leadership, resulting in a major force assisting Pandemic Legion leaving the conflict. NC. was stretched thin by a two-front war, propping up Guardians of the Galaxy against Goonswarm Federation and aiding Pandemic Legion against Provi-Bloc.

Pandemic Legion has currently withdrawn from their staging system in 9UY to Assah after the combined efforts of Legacy and Provi-Bloc launched their own blitzkrieg on Pandemic Legion and its allies. Pandemic legion continues to send skirmisher fleets into Providence.

Purple Helmeted Warriors have been allies of Pandemic Hordes in their efforts. They have long been foes of Provi-Bloc and used the invasion for themselves to claim sovereignty and some of the stations in Providence. They have at their maximum extent taken 3 systems. In the chaos of the recent conflict, they have made inroads to 9UY and set up a POS with an Astrahus to build yet another bridge into Providence.

Honorable Third Party has also performed as allies of the Pandemic Hosts. They have at their highest point taken a system and continue to hold onto their beachhead in Providence and have battled Legacy Coalition head to head with their capital ships, with both sides losing about 7 and half billion ISK in that confrontation alone.

Guardians of the Galaxy initially sent token fleets in the early stages of the war to fight alongside that of the Pandemic Hosts. With the Goonswarm offensive in the north, they have been few and far between. They have not shown up in the big battles as previously seen. Legacy Coalition has started its invasion with the purpose of removing Pandemic Legion from Providence and taking the stations at the same time, as well as inflicting some pain on Pandemic Legion in retribution for dropping into Catch region of space to attack their fleets. They have united their forces those with of Provi-Bloc in these efforts. Provi-Bloc accepted the terms of Legacy Coalition taking the stations and have for the most part respected each other in passing and aided one another against Pandemic Legion.

The heart of the fleets entering Providence from Legacy Coalition are from TEST Alliance Please Ignore (shortened as TEST or TAPI:) Brave Newbies, Requiem Eternal, Evictus, Boogeymen, Tactical Supremacy, The Watchman, and many more. The might of Test’s capital fleet has cowed Pandemic Legion in to a full withdrawal back to Assah.

Legacy Coalition deserves a bunch of credit. They have broken one of the most reputable PVP alliances in the game with their deployment to Providence. Originally it had appeared that Pandemic Legion may attempt to conquer some regions in Catch. However, during the early days of the invasion Pandemic Legion with allies lost a fleet in HED-GP. The result of this loss of a major deployment caused them to think twice about invading Catch.

Currently, the forces of Legacy are basing their fleets from ERVK in Catch, with an easy capital umbrella through most of Providence. 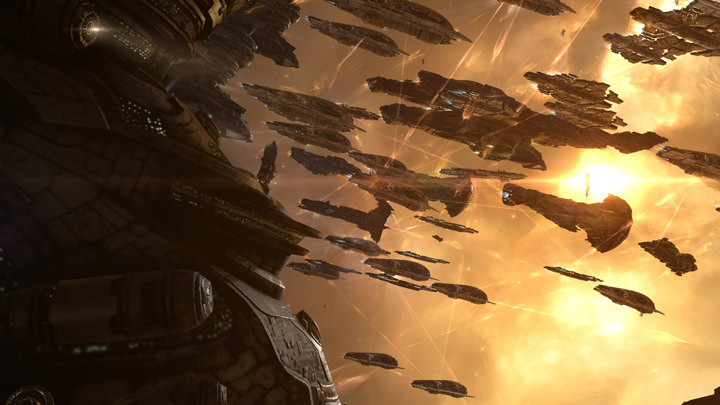 Goonswarm Federation and allies have not been seen in force in Providence since the early days of the war, having sent fleets to aid Provi-Bloc against Pandemic Legion and hosts. In the initial reconquest of Providence, they attempted to station 4 citadels in 9UY, all of which were destroyed. While busy hammering the north, it is unknown if Goonswarm will enter into Providence to claim their own piece of the station pie. Goonswarm scouts have been seen recently making bookmarks on the gates around Providence, which could be a foreshadowing of events to come.

The most ancient and noble foe of CVA is Ushra‘Khan, whose forces have been trickling into Providence over the last couple of days. 9UY was once a system of importance to the Ushra‘Khan. They built the Station there and lived there as their home system for 4 years. They have been seen moving into 9UY as of late with the written goal of retaking their ancient station. They do not wish to fight anyone but their ancient foe CVA, a saga is as old as the game itself.

Role-play has gone back and force between the forces of Ushra‘Khan and CVA. Already, honor duels have been set and the old enemies will once again clash in space combat in the same region in which epic sagas occurred in the past. CVA and Ushra‘Khan are Eve history’s first true grudge match. They were destined to be rivals from birth, with CVA only 3 days older than that of Ushra‘Khan. They were also Eve Online’s first major conflict pushing Eve canon along with it. Already Provi-Bloc fleets and those of Ushra‘Khan have battled with each other, with Provi-Bloc emerging as the victor.

Ushra‘Khan’s message can be found here.

Spectre Fleet has reared its head once again. Once Pandemic Legion started losing control of the KBP gate, the Pirates of Spectre Fleet returned, even attempting to claim their own Sovereignty. This faction had not been seen since their major fleet was rebuffed by the forces of Provi-Bloc alongside that of Legacy fleets before the Pandemic invasion. 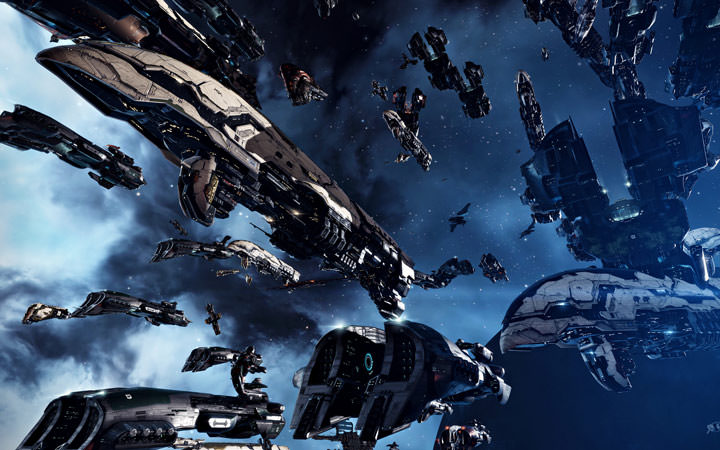 While Tactical Supremacy and The Watchmen are technically part of Legacy Coalition they deserve a special mention here. They have been fighting the forces of Pandemic legion in the current conflict. however, they have refused to honor the the non-aggression pact between Provi-Bloc and Legacy to focus the fight against Pandemic Legion.

In fact, confirmed incidents have been reported that The Watchmen and Tactical Supremacy have aided Purple Helmeted Warriors against the forces of Provi-Bloc, even going as far as destroying Provi entosising ships.

The Watchmen have been attempting to claim sovereignty in some regions in Providence, the motivations for which are unknown. However, there are many in The Watchmen that are former Provi-Bloc members. Their hatred of their old homeland is noted and it could be a power play into the region.

Tactical Supremacy has a long history of dislike and hostile operations against Providence. Like the Watchmen, Tactical Supremacy boasts numbers of members that are former Provi-Bloc. They are famous for their hatred as well for CVA, with some of their members previously inhabiting the notorious QBL pocket. Their conflicts in PI5 have been ongoing for almost a year.

In the Fog of War, Tactical Supremacy has done what Pandemic Legion never has been able to do. That was to go into QBL pocket and reinforce the citadels there. They stand almost ready to destroy every citadel in the entire pocket by Dread/Super Carrier bombing the defenders there and pushing them aside. The importance of this attack was that it was launched during AUTZ. The defenders of QBL put their citadel timers in Aussie time because that was when Pandemic Legion was weakest.

Tactical Supremacy was reprimanded for dropping alongside Pandemic Legion forces against those of Goonswarm Federation. Initially, it was reported that only one person was doing that. However, killboards showed multiple members of Tactical Supremacy were involved, putting the lie to the claim.

In recent developments, the Watchmen have dropped for Tactical Supremacy on joint Legacy and Provi fleets to kill Provi members in the fleet. They have also killed Brave and Requiem pilots working alongside Provi members against Pandemic Legion and friends. TEST alliance so far continues to reimburse pilots that are being betrayed by these two groups.

Yokai is a new development inside that of Providence. They have attempted to establish a stronghold in TU-O0T. Recently their Athanor was destroyed by the Apocalypse Now-led fleet of Provi-Bloc while both of their fleets fought outside. They have been conducting raids into Providence and it is unknown what motivation these newcomers have in coming to providence and dropping citadels around the region.

Have anything to add or corrections to make? Let us know in the comments below.