The Million Dollar Baby: The Coalition of the North Wins EVE largest Battle ever.

Hours before the form up started, I found myself in a business meeting having a hard time explaining non-EVE players the concepts of Keepstars, hull timers, titans, supercaps, FCs, warp-ins, and grids. Even harder was explaining how important yesterday’s fight was to the participants. The political implications and the fallout should the 9-4RP2 Keepstar fall. Despite all this, these non-EVE players found the conversation even more fascinating than the football discussion we were having before, and it gave me a slight idea of the phenomenon that was to happen over the next few hours. 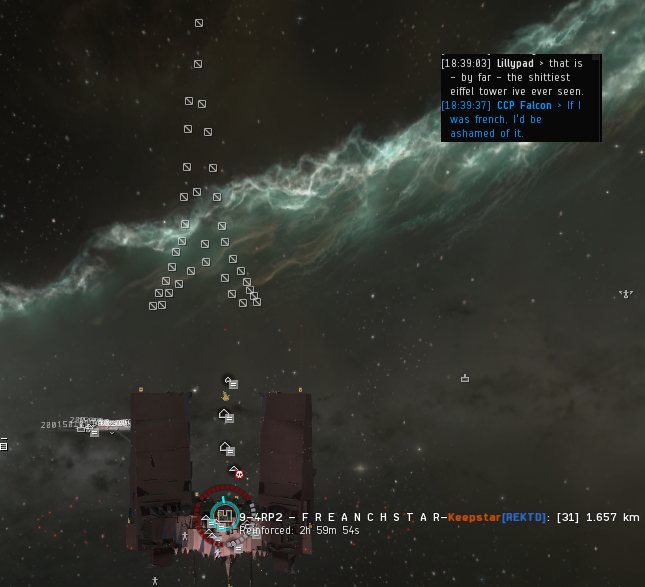 Despite its faults, despite the grueling TiDi, the disconnections, the module unresponsiveness, having to wait one hour to put a cyno module online or the perks of hearing your fleet mates figure out ways to make the god damn weapons work; yesterday, history was made. One of the most memorable – yet underwhelming – fights in EVE history happened in the region of Cloud Ring.

The calm before the *bleep*-storm

For the best part of the past week both sides, the attackers led by Goonswarm Federation, and the defenders composed by the combined forces of Northern Coalition, Pandemic Legion, Guardians of the Galaxy and of course the Pandemic Horde home team, rallied their troops, ships, and assets in neighbouring solar systems. The amount of preparation from both sides was paramount.

Just like in the previous engagement, the defenders chose an armor based doctrine across all their fleets: ranging from sub-capital Machariel & scorpion fleets, to carrier and apostle force auxiliary support wings, with a large number of armor based supers and titans in the super capital fleets.

The attackers once again had a mix of doctrines. They had everything and then some more; Machariels, Lokis, Bombers, Ravens, Jackdaws, interceptors, interdictors, a massive mixed titan fleet and possibly the most enormous carrier based fleet EVE Online has ever witnessed. You name it; they had it.

The stakes were high, losing the final timer would mean having the defenders super-capital fleet tackled on a grid at an enormous advantage to the attackers for the reasons I am about to explain below.

The order of battle was as follows: Goonswarm and its allies had seeded several smaller siege citadels thousands of kilometers around the Keepstar’s grid: 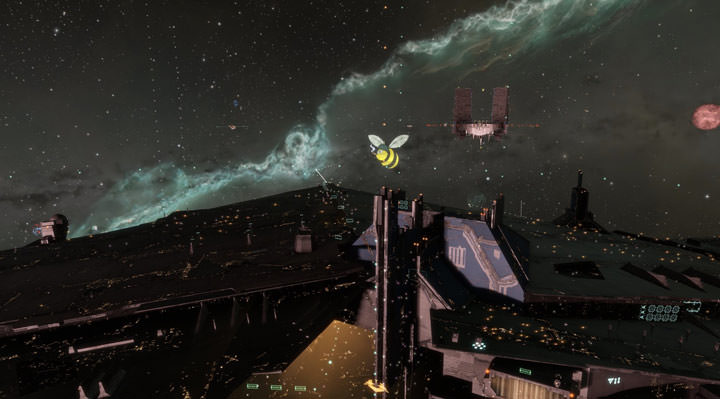 Having citadels on the same grid would allow them to jump their capitals onto their citadel’s tether range, and engage the target Keepstar with fighters from afar in relative security. With the defenders therefore being unlikely to attack them as after disengaging for sixty-seconds (aggression timer) it would grant them tethering / docking rights.

Fast forward to 21:00 EVE time. The timer came out, and the attacking fleet started cynoing in from their staging solar system.

A trap card has been activated

Unbeknown to Goonswarm and friends, PanFam had one trick up their sleeve. During the initial supercapital jump, several cynos were lit at the aforementioned attack citadels, except one; an infiltrated spy on the GSF super capital fleet lit a cyno 200km above the defenders Keepstar. Bubbles went up almost immediately, the chosen spot was at range from the staging defending super capital fleet. 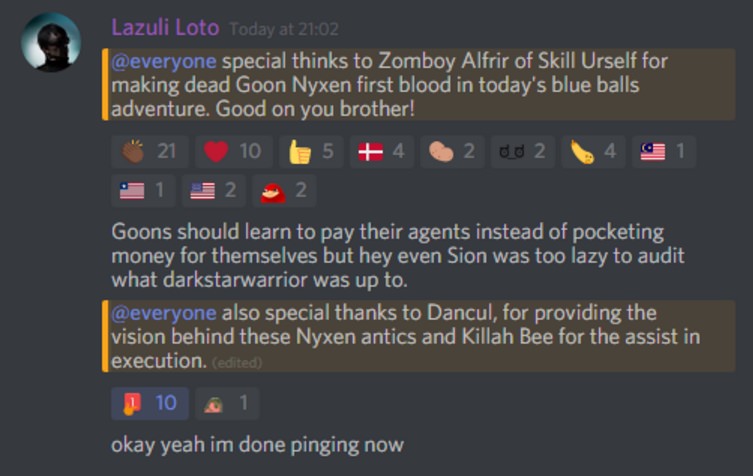 Four GSF Nyx jumped to this cyno falling right into a trap so old it is seldom used now in null-sec warfare:

After this small initial victory, it was clear from the start that the Goonswarm led attackers were determined – even more than before – to take the Keepstar down, being faithful to their name; a locust-like swarm of fighters furiously roared into the Keepstar. The defenders suddenly found themselves on the back foot. 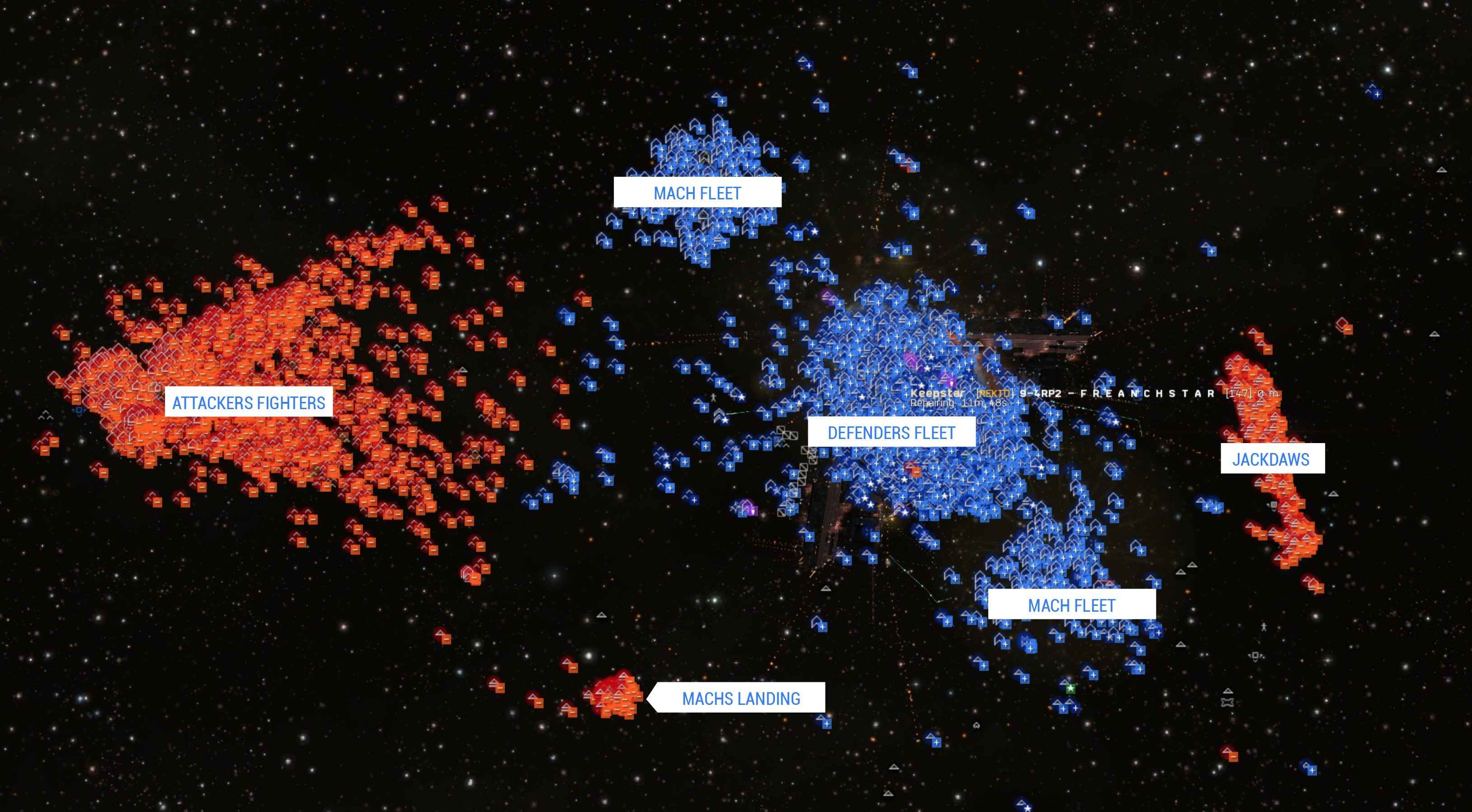 For those unaware of how citadel timers work, here is a primer. Just like your ship, you got three buffers – shield, armor, and hull – each buffer has a repair timer that goes down if it reaches zero the structure survives and enter into regular invulnerability. A caveat of this mechanic is that under attack the timer will stop and the buffer will start to receive damage until it reaches zero and the structure explodes in one satisfying explosion.

Now, picture this: hundred of supercaps releasing three squadrons of fighters for an average of 5,000 damage per second each ship, not counting the sub-capital support fleet or the even more massive support carrier fleet which also has light fighters of their own. All from the relative security of their citadels grid. It was no easy task for the defenders as they also faced how bad the citadel timers are during Tidi, they run at real time while everything else is at slow motion. The timer was stopped at eight and a half minutes for the bulk of the six-hour battle. 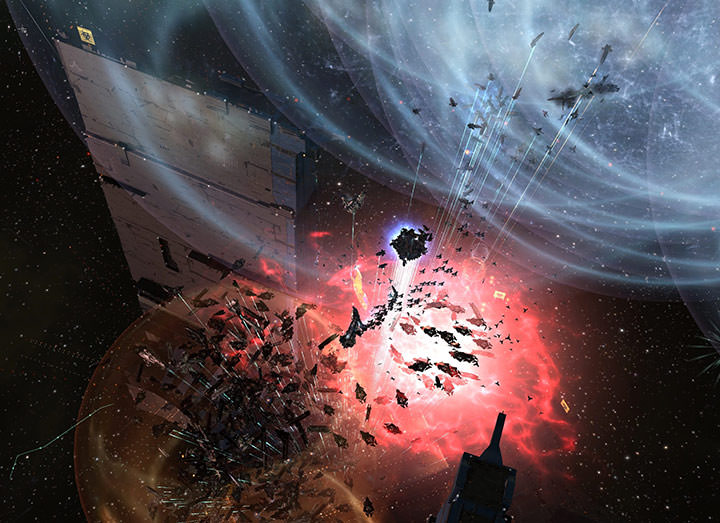 To defend against such tactic; the defenders used a three-prong approach; having their carrier/supercarrier fleet engage the attacking fighters thru the use of space superiority fighters of their own, which are designed to attack other fighters more efficiently. Secondly, having the sub-capital fleet engage, destroy or chase off range the distinct range of support fleets the attackers had deployed. Thirdly, utilizing the standing-by titans also to engage sub-capitals.

History in the making

Which leads me to the neck-snapping headline of the night. Each side poured close to 3,000 pilots to a total of 6,000+ pilots on a single solar system. CCP Games were to have yet another milestone to brag about (rightfully so). Still, for many pilots, it wasn’t a fun experience. The constant disconnections, the need for potato-graphics to be enabled, unresponsive modules, soul-shattering lag, black screens, human sacrifice, dogs and cats living together, mass hysteria! Well, you get the point.

System is at nearly 6000 but we have nearly 2000 more to bring into system between us and goons. I don't think this node can take that escalation. #tweetfleet

Whenever bitter vets talk about how CCP Games shouldn’t be doing “x” and instead focusing on “fixing the game”; this is what they are referring too. CCP Falcon mentioned it in one of the streams he participated in when questioned about what a “node” is:

There is always talk about “legacy code,” well that above is what they are referring to. The need for the code to be redesigned to take advantage of ten years of technological progress, most applications nowadays depend on parallel processes, resource balancing and distributed or cloud computing strategies. Having a six thousand man battle run not on a single processor, but on a single core is a very hard red-pill to swallow.

My view for the past 20 minutes. 😄 #tweetfleet pic.twitter.com/1nPfYwFxSd

Having said that; CCP Games and its engineers are to receive praise for the work they did to keep the node alive, despite all the shortcomings (which were caused and affected both sides alike). The confrontation happened, and it wasn’t interrupted by a fatal node failure despite the enormous stress put on the dedicated resources.

When the fight ended Killah Bee (NCDOT), the project manager of the 9-4RP2 defense, stayed on comms afterwards and took questions from several capsuleers. I took the opportunity and asked him “How close we were to losing the Keepstar?” After a short pause he told us “closer than most people think”. This grim commentary should give you an idea about the challenges the defenders faced. Despite having the advantage of the fast timer in TiDi, their efforts had more moving parts than the attackers. For example, the attackers – while unable to refuel their fighters – only had to engage a single structure. The defenders, on the other hand, were forced to change targets more often, a challenge during extreme time dilatation periods, in this engagement TiDi was turned up to eleven.

When the attacker’s damage started to factor in, an unrelenting scenario began to unfold in the back of the defender’s mind; the DPS was just too high, the DPS source evenly spread throughout the grid and resource management was going to be an extremely difficult task.

Keepstar currently at 80%, local down to 4600+ #tweetfleet most fleets still engaging on the field, TiDi is as gruelling as it can possibly get. pic.twitter.com/71rWLFS00Z

The first order of action for the defenders was to engage the sub-capital fleets around the Keepstar perimeter. The defending Machariel fleet, led by a probing FC engaged and chased Ravens and Jackdaws. Titans were called in, to volley GSF Machariels and Ravens. Smaller GOTG members were busying themselves hunting bombers and interceptors who harassed the sup-capital units.

Having the grid cleared off enemy supcapitals allowed the defenders to focus on the enemy fighters, due to TiDi mechanics reloading fighters wasn’t an option for the attackers and the battle reached a point where the Keepstar hull reached 60%, then started slowly to rep up. The timer started to run again, and then the news came:

No hubris. BUT KEEPSTAR IS REPAIRING SLOWLY. #tweetfleet

An unlikely victory arrived. The attackers ordered their capitals to abandon drones and their sub-capitals to disengage.

01:50 – Goons realize they’ve lost. Abandoning fighters, hope, and any chance of winning the fight. Keepstar is finishing final repair as I post this.

The defenders focused on securely extracting their assets back to their respective staging systems.

The stakes were high for both sides, Goonswarn Federation had suffered tremendous industrial losses after leaving their home regions unguarded to invade Cloud Ring. Their honor was at stake here. Destroying the Keepstar and thus inflicting massive damage on the exposed Northern capital fleet would have justified several times the “sacrifices” made in the south. A “means justify the ends” narrative would have been pushed forward to offset nearly half a trillion lost in the pursuit of force projection across the galaxy. None of this was to happen now. Despite not losing many more capitals than other engagements, Goonswarm Federation and its allies – the most massive coalition ever conceived in the game – had the responsibility to win the 9-4RP2 battle. The prospects of bragging rights would be reward enough for several coalition leaders to commit for this endeavour.

On the home camp, the immediate result of losing this battle would have been a crippling blow to the Northern super capital fleet, which would allow attackers to hit other solar systems and assets with impunity. It was a disastrous scenario for coalition leaders eager to show the world why they are considered the best players in the game.

A notable absence for this battle was TEST Alliance and Brave Newbies, whom many thought might show up as a surprise participant to turn the tide in the attacker’s favor.

In the numbers game, the kill to death ratio further confirms the defender’s victory; 35 billion isk inflicted on the defenders vs. 340 billion in damage losses to the attackers: 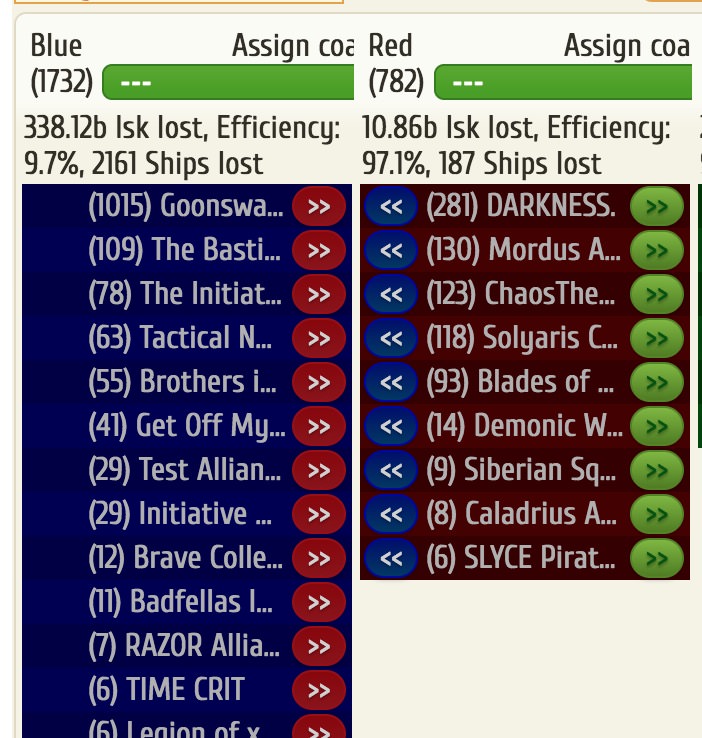 It is left to see what lessons both side have learned from the engagement and how tactics will be modified for future large battles. For me, for the next time, the biggest lesson learned has been to always carry mobile tractor unit in my cargo hold. :sigh: