Two months ago, the EVE community lost CCP Blaze, a Senior audio and graphics programmer who spent eight years working on the game we all love. If you’ve ever gone to warp, you’ve seen the mark he left. More importantly, though, he left behind a fiancee and a toddler. Shortly after his death, CCP staged an internal fundraiser, then turned to the community. They released a limited edition set of objectively gorgeous black-and-bronze SKINs featuring a small portrait of Blaze. 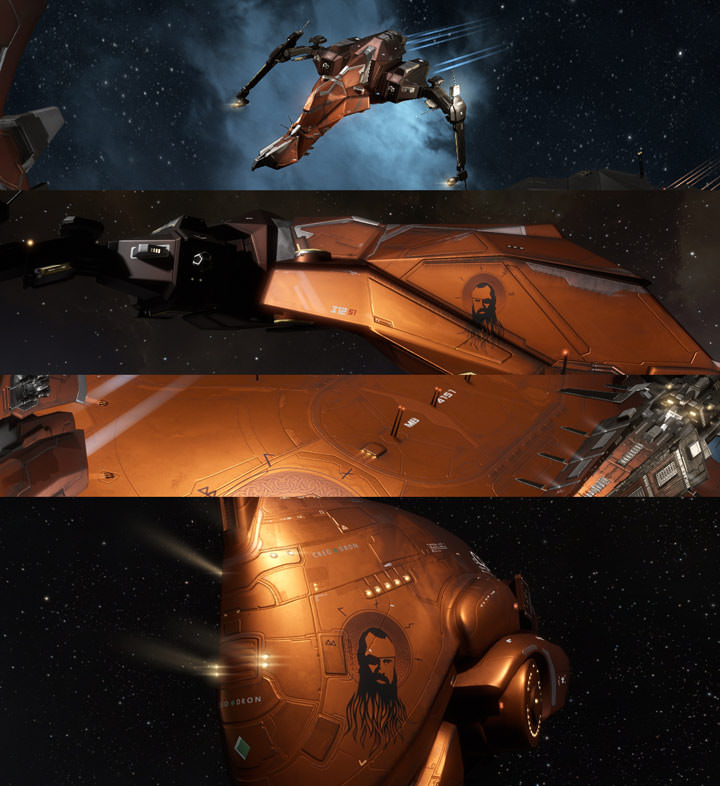 The permanent Blaze Squadron SKINs were available only for a single week in mid-December, and all proceeds went to CCP Blaze’s family.

The community answered. Among a thousand other Reddit comments (many of them simple salutes), a few stood out to me:

I’ve been playing since long before Blaze joined the team, but he relit my ship trails, shined my wingy bits, and made the game more and more beautiful every day. I will most definitely be wearing his face all over my ships, and I’m happy they are sending the funds to his family. Money can’t get you your father back, but its every father’s dream to leave behind something for their children, and I am happy to help show them just how much he left behind for us all. – LazlowK

Our corp runs a Secret Santa. I have found the gift I will be giving this year. – AnElementOfSurprise

This is the CCP I remember when I joined. – WallymartsEve

They’re beautiful. They’re a perfect tribute to someone who spent so long making this game as bright and miraculous as it is. – Carlo_The_Magno

Now, CCP has released a deeply personal devblog revealing the results of the Blaze Squadron fundraiser.

In total, between December 12th and December 19th, the EVE Community donated 3,730,320 PLEX through the purchase of “Blaze” Squadron SKINs. This is the equivalent of 620 YEARS of game time. More importantly, it represents a donation of USD 119,828.50 that CCP will make to CCP Blaze’s family on behalf of the EVE Online Community. To put the numbers into perspective, this is the second largest CCP hosted fundraiser that the EVE Community has contributed to, eclipsing all but one of the PLEX for GOOD drives in just seven days. It’s honestly not possible for us to find words that would accurately convey the gratitude we feel to our pilots. Once again, the EVE Community has shown that despite differences in game, our pilots are a formidable, and indestructible force for good.

As a father, I often worry about what might happen to my family financially if I was gone – but for the foreseeable future, Blaze’s family can focus on healing.