EVE CSM minutes indicated a new EVE Launcher was on the way and it is shaping up to be a great little package.  The code name “Bootstrapper” will have new abilities including batch launching, settings groups and simplified access to test servers.

If you have played EVE for some time you will recall the launcher was unified with the client.  The look and feel of starting EVE was quite different.  There would normally be a theme and art for six months, before it changed with the next expansion.  This gave EVE a sense of seasons it lacks today.

Here are some examples of past seasons in EVE:

A playlist can be found here [Log In Screens for EVE]

Patching (updating the game) required you to start the client first, and if there was a patch the client would stop you and send you to the back of the line, patch before play.  This lead to players warning each other before logging in so, if there was a flash form CTA, people wouldn’t get stuck waiting.  At a time when expansions were huge, patching could take a long time just when you were eager to see the new features.

Getting on the test server was difficult and would require a second installation of the huge game, taking up disk space. Some players would have a PVP configured installation, mining installation and so on, just so they didn’t have to change settings back and forth.

The biggest drawback on the old launcher was that new players would have to download and install the game before trying it out, a possible deterrent.

To forge ahead with gaming trends, CCP created a new launcher in Crucible 1.5 ( March, 2012) that would allow for the development of instant play and background patching, as well as a “multi-payload” launcher. The launcher could also display news and announcements from CCP as needed. It also had a built-in repair tool for the client, saving you from seeking out the separate repair program that came with EVE’s install. 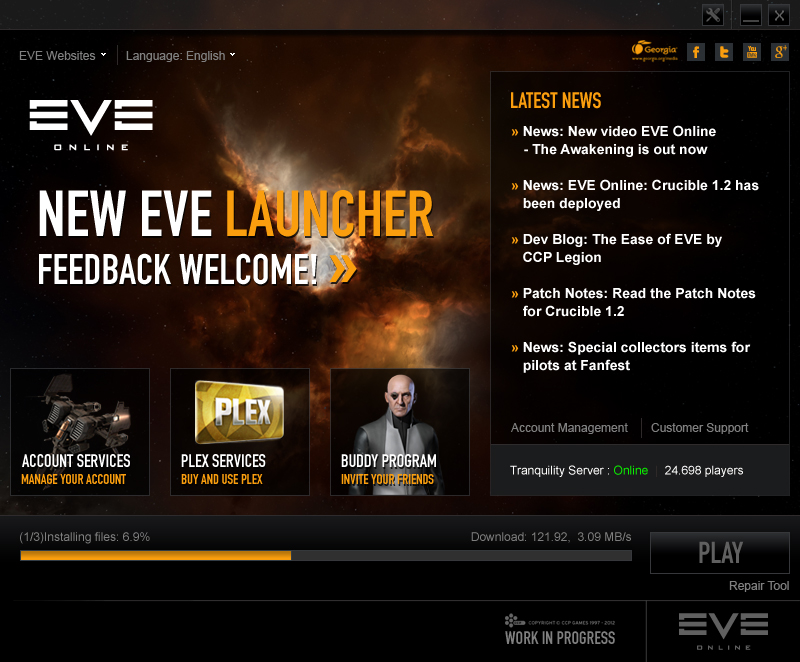 The new launcher has been upgraded over the years to what we now use, and has had it’s share of stability problems. The launcher still had to update once it launched so it would keep you out of the game until the patch was done. We’ll get our first look at the new launcher, code named “Bootstrapper” at EVEsterdam 2015. It is a complete rewrite of the launcher that will allow interesting new functionality. It will work on both Windows and OSX, and could possibly be constantly on and hidden in the system tray (as requested by CSM). When the launcher is on it will constantly keep all your installations current.

No screenshots are yet available, but sources from CCP indicated it will have a similar shape and size, but instead of a splash screen it will present you with a list of linked accounts.  Those accounts that are linked through account management area. There will still be announcements and Messages of the Day (MOTD) on it.

You will be able to arrange accounts from the list of accounts into launch groups. One click gets you to multiple log in screens where you select your characters. You’ll only have to sign in once to launch multiple accounts.

Here is a teaser. A glimpse at what the button will look like when you are about to launch two accounts:

It will be interesting to see if casual multi-boxers default to launching multiple accounts, and what affect that will have on the concurrent log-in user statistics.

For the vast majority of players that only use one account there is saved settings, up to 14.  To save settings you will set yourself up the way you want and save the settings, just like you do with Overview settings.

This means you can set up to launch in fullscreen mode and audio on. If you want to watch a movie while you play you can have a different setup that launches in windowed mode with sound off.  Big fleet fight coming, then set up a low res option to lower lag.

This settings group will magnify with batch launch, allowing you many ways to mix and match your experience.  You can launch your mining fleet all at once with all the proper settings, or your “solo” pvp setup with booster and falcon alts ready to go.

This is a giant leap from the days when players had different EVE installs for various professions; pvp, mining, capitals.

The test server will be easier than ever to get into.  It will simply be a drop-down option, that’s it.  Bootstrapper will take care of keeping your single EVE install up to date, and manage the cache for you. All you do is select what server you want to jump into.

Don’t forget that once you get on SISI you can use commands to immediately update your ship fits and skills.

When the multi buy tool hits EVE this will be a potent combination for testing concepts on SISI.

We lament the loss of our “seasons” through the old log-in screen that used to set the mood with music, imagery and animation, but there is no comparison in terms of utility. New players can get into EVE within minutes of deciding to try it out. Maybe the beauty of the old log-in was to keep you interested while you waited and that is just not necessary anymore. Still, the return of expansions might help mark the passage of time.

The launch button shown above was scrapped after we published the article, but now there is a screenshot available.