Bored? why don’t you try some Space Buzkashi?

In ancient times before the Minmatar people took to space, the Thukker tribes roamed the harsh and barren steppes of their homeworld. Life was a brutal affair for these hardy folk and their games reflected this reality. I had long heard rumors of one such game known as Buzkashi and I was determined to learn more about it. My determination was initially because I originally thought the game was called Bukkake but by the time I had realized my error, I was hooked on the chase. For years I traveled from one shit hole to another in search of clues to the rules of this mysterious game. 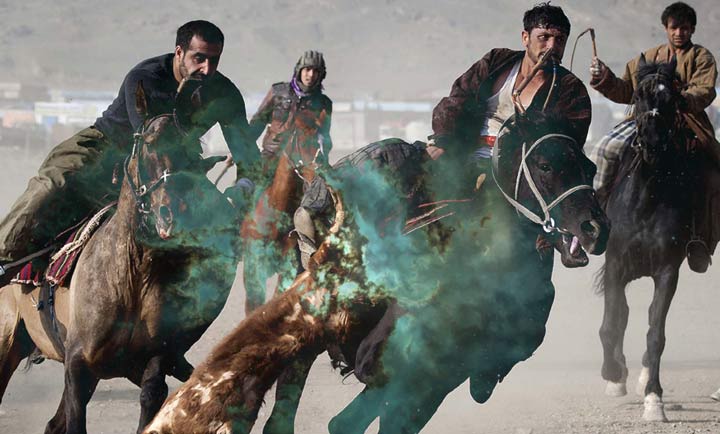 I have taken these original rules and used them as a basis for a new game to be played by my fellow capsuleers. The design was also inspired by my love for the movie “The Salute to the Jugger.” Space Buzkashi can be played by characters with just a couple days training under their belts. It is a violent game so it can be most easily played in areas of New Eden where the local authorities will not interfere but so long as you understand the Dueling mechanics, it can be played anywhere.

Field of Play:
1. The two goals are placed 50km from the center point, in line with each other and the center point. (see diagram)
2. An Entrance point bookmark is 35km over the center point of the field of play.
3. There is no “out of bounds” pilots may travel as far afield as they wish. 1. Two teams of 5 pilots each.
2. One scoring element known as the ‘Goat’ typically represented by a R.A.M. module.
3. Two anchored containers acting as goals. One goal per team.
4. One referee.

1. The objective of the game is to move the goat from the center location to the opposing team’s goal and then place the goat inside the goal.
a) The goat must remain in the jet-can except to be moved into a goal.
b) The jet can may only be moved by means of a tractor-beam.
2. Shooting the jet-can is prohibited.
a) Any pilot who shoots the jet-can must return to his or her goal and make one orbit.
b) Destroying the jet-can will result in a point being awarded to the opposing team.
3. Ships may not use warp except;
a) Ships may warp off (if able) to station for repairs during a point. Ships returning to the point must warp in to the entrance point and burn down to the field of play. Ships warping in directly to the field of play are considered destroyed and must remove themselves from play.
b) To return to their respective goals at the start of a new point.
4. At the start of a point all players must be orbiting their respective goal at not more than 2500 meters with prop mods off.
5. The point begins when the referee jetisons the goat.
6. Players breaking orbit before the start of a point must return to his or her goal and make one complete orbit before re-entering play.
7. It is legal (and encouraged) to destroy the ships of the opposing team.
8. Ships may warp to station (if not pointed or scrammed) for repairs during a point.
a) Ships returning from getting repairs must warp to the Entrance point bookmark and then burn down to the field of play.
b) Ships may not dock up for repairs in between points. Ships wanting repair must wait for the start of the next point or a quarter break.
c) Ships dock up for repairs without penalty in between quarters.
d) Ships may make self-repairs without penalty or restriction.
e) Ships may make remote repairs without penalty or restriction.
9. All referee decisions are final.
10. Destroying the referee will result in forfeiture of the match by the offending player.