Late EU/early US time zone on the morning of the 19th October 2014 a small contingent of five or so dreads from Nulli Secunda dropped on a POS belonging to a member of the Cluster Fuck Coalition. CFC formed up almost one hundred carriers and thirty dreads, probably sensing a trap though deciding to spring it anyway, they cyno’d in at a celestial, aligned to the POS that was being hit and engaged warp just as the Nulli Secunda forces deployed a number of bubbles. These would then catch the CFC fleet before they could land in the safety of their POS field.

Once Nulli Secunda confirmed they had captured the large CFC fleet they jumped the rest of their thirty man dread fleet along with a large Cerberus based subcap fleet into F7C-H0 and got in touch with their N3 friends and the mercenary alliance Black Legion.

Rage pings went out to Black Legion, Northern Coalition. and Gentlemen’s Club who quickly formed up their own response fleets and logged on their titans to get subcaps onto the field.

Black Legion formed up in a 50+ man Ishtar gang along with dread alts on standby.

NCDOT brought in a 120+ man tengu fleet, and Gentlemen’s Club also came in a Cerberus fleet with around 70 odd pilots. All the alliances brought their own support in the form of Scimitar Logistics and Huginn/Lachesis recons.

CFC decided to bring in a 70 man Tengu fleet with the same Scimitar Logistics and Huginn/Lachesis combo that NCDOT did but in smaller numbers. They also brought a large 60+ man assault frigate wing in the form of the ever popular Harpies and a couple of Hawks. Here is a Dscan of the system at around 00.17 EvE time.

Once the N3 alliances and the BL mercs had landed in their subcaps and were convinced that they had the upper hand and at the CFC were not going to be committing any super capitals to the fight the allied alliances dropped their remaining dreads into the mix.

To start with the CFC carriers and dreads tried to put up a fight, going into triage/siege and taking shots at the hostile dreads that were on the field. However, once the N3 alliances and the BL mercs had landed their subcaps on field and had seen they had the upper hand the allied alliances dropped their remaining dreads into the mix. Having the upper hand convinced the N3/BL FC’s that the likelihood of a supercapital escalation in this fight was very unlikely.

As the CFC FC’s realised that they were losing dreads faster than they were able to kill the enemy ones, they had the enormous task of having to slowboat the 60 km or so from the bubble, that they landed in at the start of the fight, to the safety of the friendly POS. Running a gauntlet of dreads and subcaps baying for CFC blood and being constantly re-bubbled by Interdictors.

After making it the 60 km, and after losing a good amount of dreads and friendly subcaps in the process the remaining CFC pilots thought they had managed to get to safety. However, N3/BL had one last trick up their sleeves and managed, through the use of their well-oiled spy network, to gain access to the POS password. Que the N3/BL subcaps to start trying to bump the safe CFC capitals back out of their POS.

At least one Revelation was bumped out of the POS and destroyed thanks to having gained access to the password and the POS, the original catalyst for this fight, was put into reinforced. After this the N3/BL fleet regrouped, scooped drones and aligned out, exit cyno’s were lit and the dreads and the few random carriers who had come in, jumped to safety. The subcaps then extracted and ‘GF’s’ were exchanged in local, the fight was over.

The butcher’s bill was as follows; the N3/BL fleet fielded the most, around 500 ships in all and lost about 85 of those, including 22 Dreadnaughts, 16 Heavy Assault Cruisers and 20 Interdictor destroyers. The ISK lost for the N3/BL fleet came to just over 76 billion ISK.

The CFC fleet fielded just over 370 ships in all and lost around 120 ships by the end of the fight, including 28 of 30 fielded Dreadnoughts, 12 Carriers and 12 Logistic Cruisers. The ISK lost for the combined CFC fleet stands at a little over 120 billion ISK and includes a very expensive pod belonging to Arrendis of Goonswarm Federation worth a cool 4.3 billion ISK and is actually worth almost 3 times as much as the carrier that was lost in the same fight! Just after the fight a ping went out on the CFC Jabber, which stated that they had pulled off an amazing victory, outnumbered and outgunned. However an hour or so later another ping was sent out on the CFC jabber that stated that they had spoken too soon and that the fight had indeed been a decisive loss though lessons had been learnt and future fights would go a lot better for the CFC.

Was this the just a ‘for content’ fight as the CFC wants it to go down as? They quickly took to reddit and the forums saying that nothing was lost and that the fight meant little as all the ships were insured, which Black Legion did after losing a number of dreads last week taking down a CFC titan. However, this time both sides were able to claim insurance, so it doesn’t matter. What matters is that, in just a few weeks Phoebe will hit which will make the force projection a lot more difficult. Would this fight have happened post Phoebe? How far did the CFC have to travel to get their cap fleet into F7C-H0? I know that Black Legion had to use a mid point, and I’m guessing the CFC needed to use at least one as well. This sort of fight won’t be something we see as often post-Phoebe. Is this a bad thing? Will it make this type of fight more of a strategic conundrum for the FC’s of the big alliances? Only time will tell. 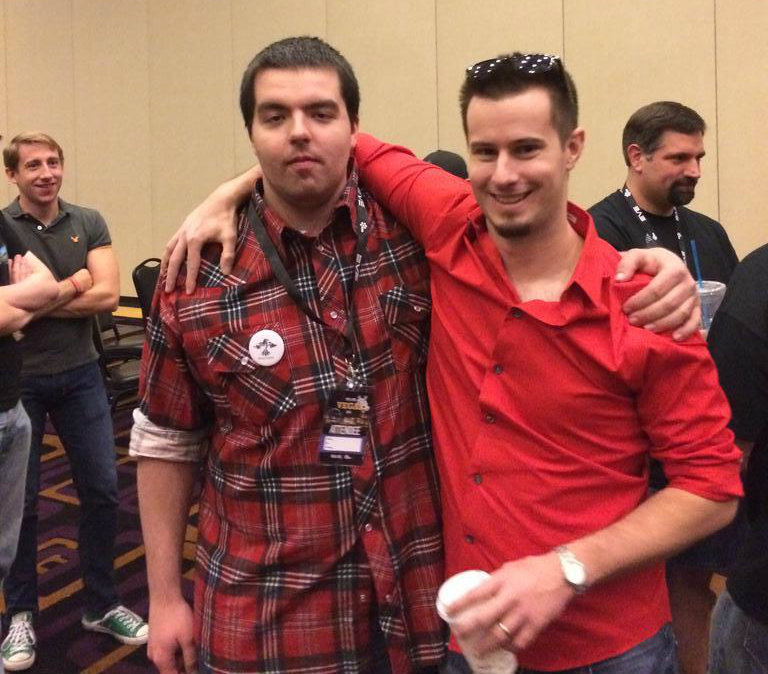 Picture of Elo Knight, Black Legion CEO and main FC and The Mittani, CEO of Goonswarm (CFC) together on the 18th October 2014 just hours before the fight that put their two large alliances at each others throats.