Darwinism, admittance is the first step

This Darwinism is unlike the others in that it was sent in by the individual who had the losses and instead of being one or two losses it was a more broad 13 individual losses.
While each loss in of itself might not be horrible like the other articles, these show a pattern of continuing behaviour and may in fact be more worthy of the title “Darwinism at its finest”First up we have 4 similar kills, all of which are Republic Fleet Firetails. I do want to mention at this point that the pilot is indeed a factional warfare pilot.
Firetail 1
Firetail 2
Firetail 3
Firetail 4
Each of the above losses are varying attempts at making the perfect factional warfare Firetail, the first and most common type of firetail I encounter in faction warfare areas is a webbing artillery fit. This fit is usually 2 webs to hold the opponent as close to immobile as possible so the tracking of the artillery can hit with its huge alpha and burst through the opponents repairs.
Sadly this opponent was more than just a frigate and was actually a Sacrilege. The outcome was as you can imagine. 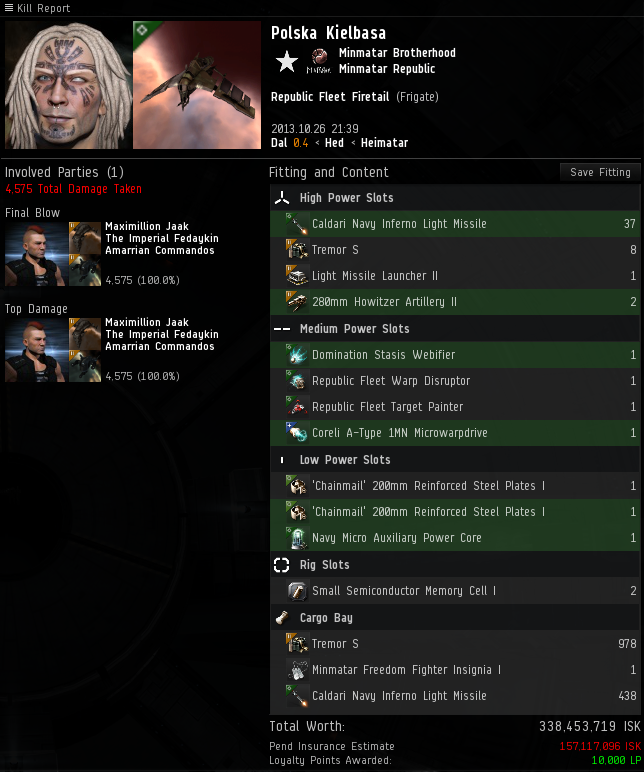 The fit preferred by Polska Kielbasa seems to be a more brawling Firetail using autocannons and a rocket launcher, while this fit may indeed work, it falls to the more common of fights in lowsec with more opponents rushing in to tag team a single ship.
With each loss Polska reships and tries again which personally I like to see, what use is isk if not to have fun with it and use it?

The next loss is a Stiletto interceptor, after losing his fourth expensive firetail Polska having trained everything he needed for an interceptor decides to put the new ship to work.
Stiletto
This just like the others ends up being lost, being fit quite similar to the Firetails his prefered play style and engagement type is becoming obvious, I won’t however mention the stacking penalties of using 2 tech 2 sensor boosters, 2 signal amplifier 2’s and to finish it up 2 tech 2 Targeting System Subcontrollers ( which increase how fast you target but lower the total amount of shield you have). Lets move on to faction warfare in highsec.
The following kills all took place in highsec and Polska was likely baited into shooting a ship on the undock of a station ( a common practise for faction warfare veterans is to sit on the undock of heavily used faction warfare stations in highsec in enemy space and shoot the targets as they come out to either alpha and kill the target or to provoke a fight).
Vargur 1
Vargur 2
Vargur 3
What is usually not known by pilots willing to engage these targets is that the opponents in hostile space do not come alone and have friends in logistics type ships or more dps ships in station waiting to undock. Once aggressed the pilot has to wait 60 seconds from the moment his hostile modules finish their cycle, hostile modules are anything that negatively affects another ship. If we have learned at least one thing from this pilot so far though it would have to be they are willing to fight and use their isk.
This can also be demonstrated by the 3 vargur loss mails he receives in highsec as well as the multiple lowsec losses.

Sometimes the loss of the ship turns out to be not as bad as losing the capsule he was in also.
Capsule 1
Capsule 2

After losing a large chunk of ships and still remaining in faction warfare what does one do about the high cost difference of items in the minmatar trade hubs and other stations?
If you answered “Freighter them in using an alt character” you guessed about 50% correct. Polska decides to move a plethora of ships he will be using via his fenrir and is promptly located and destroyed.
Fenrir 1
After losing a freighter moving around in highsec Polska wisely decides to no longer do that.
Unwisely though he decides that doing it in lowsec might be safer, and is promptly found and killed again.
Fenrir 2
While a lot of things can be said about this pilot, perhaps the one thing that speaks volumes is that despite losing a lot of isk he has not become risk averse and continues having fun his way.

Do you have some killmails you want shared?

Special thanks go to Polska Kielbasa for sharing these glorious loss mails and for being a good sport about it all.