No Value Wyvern Down!!

Last night, A No value Wyvern died at the hands of Triumvirate.

It was a normal Wednesday evening for Triumvirate, with their members slowly starting to login to FDZ4-A, their current staging system. More and more people trickled in when, suddenly, Chris Lares spoke up on comms:

”Snails And frogs have some carriers tackled!”

Quickly, TRI formed a small ishtar gang and started burning to their destination. One of the members that had just logged in found a wormhole leading to Cobalt Edge. This was perfect for the small gang, which quickly got itself to the WH entrance. The gang was ordered to jump through and start burning the 16 jumps to the tackled carriers at best speed. While burning through all these systems, 2 Triumvirate members started to get behind.

The small TRI gang got to MK-YNM where they landed in some bubbles on the outgate. Most of the fleet jumped through but the 2 lagging pilots noticed a new neutral in local. They decided to wait a bit and see what it was. The neut decloaks – a rapier.

Both pilots to wait a bit and, sure enough, the rapier lights his cyno. Suddenly, a Wyvern appears. Both TRI pilots burn over to the Wyvern and started bumping it. The Wyvern had cynod himself into a bubble and started aligning off to a belt. A quick call went out to StarFleetCommander, one of the main FC’s within Triumvirate, and he started forming a bigger ishtar fleet.

The Wyvern had, by now, managed to align off out of the bubbles completely and warped itself to the belt. The 2 tri guys followed but landed of the wyvern at a 100. Then the Wyvern did something weird. Instead of jumping out he aligned to the planet 7 cluster and warped off. Again the two TRI guys decided to follow but this time they landed right on top of him.

By now, the rest of the small TRI gang had returned into system and got themselves to the two fleet members that were sitting on the Wyvern. Tackle was established and the Ishtar’s started to put damage on the Wyvern.

While this all was happening, StarfleetCommander slowly started to get his fleet into system and warped to the tackled Wyvern as well. The Wyvern was now well and truly tackled. So, he decided to try one last thing: he warped in his rapier and lit a cyno. A couple of No Value carriers jumped in; but, this wasn’t enough to save the Wyvern. The carriers were quickly picked off by the Ishtar fleet and damage was back on the Wyvern.

As the Wyvern enters low structure a bomber suddenly decloaks and lights a cyno. PL arrives in an attempt to save the Wyvern but it was already too late; the Wyvern popped.

The PL fleet consisted of mainly archons, and seeing there was no more blood to be shed, the Triumvirate fleet was told to GTFO. The Tri gang got home safe with a tasty killmail added to their killboard. 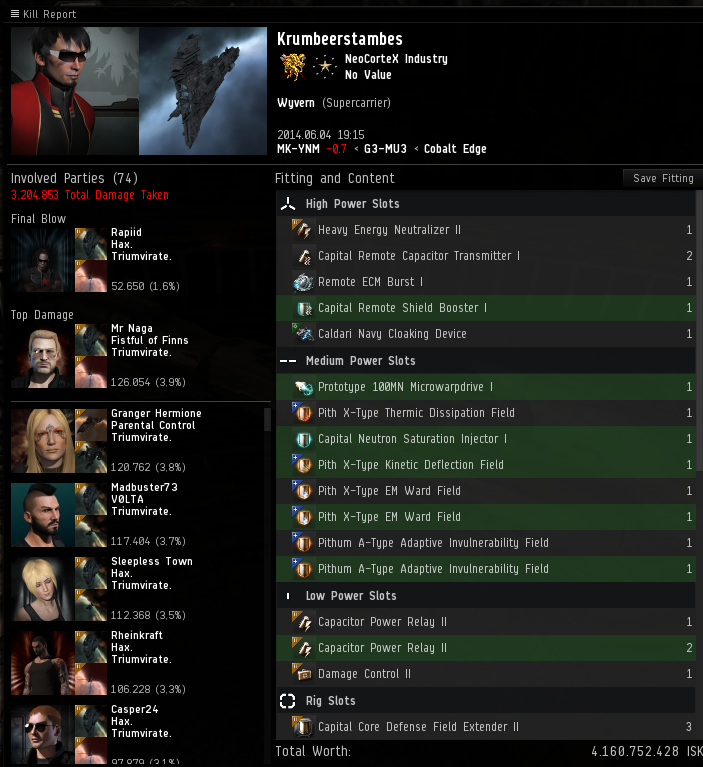 Killmail of the Wyvern
Kill overview of the entire fight

Video of the kill

A big thanks to Rheinkraft and StarfleetCommader for giving us the background story!