As many of you have already seen, streamer Simon “Mad Ani” has posted on the EVE-O forums that he wants CCP to hire him fulltime as a streamer.

I assume there’s going to be a shit storm in the comments below this, and if it’s possible, can you keep things of why and why not for him being hired in the forum post, so that:

2. If you want him to be hired or not, posting there will have more influence than posting it here.

Personally, I don’t want CCP to hire Mad Ani, on the basis that hiring him is just a bad idea. I have my reasons, which you can read on my post in that forum, which will be linked below, but here’s a basic recap of them now:

1. He’s not the most versed in EVE, and doesn’t know what’s going on a lot of the time.

2. He doesn’t care about his viewers that much, and when someone new tunes into the stream that may have no idea what EVE is about, he tells them he doesn’t want to repeat himself, and then on occasion bans them / mutes them.

4. Unlicensed music. It doesn’t sound like a big thing, but if he works for CCP, anyone can complain to UMG and CCP could face a lawsuit for using unlicensed music to make a profit. (Thanks Ani)

Those are the big four reason I have as to why he shouldn’t be allowed to work for CCP.

From what I’ve read on the forums, there are a few people that have tried to defend Ani in wanting CCP to hire him, and have said that they would like CCP to do it as well. A good chunk of the comments are something like this:

1) Beg for a PC fund keeps casually growing then seems to stall just before it’s 3rd or 4th target for a few days
2) Ask in channel if stream revenue goes towards new PC fund = removed and banned from channel
3) Slide show of an undock with rude / no commentary is not interesting.
4) Now he has a new PC paid for by the White Knights of the Round Table of Ani he finds new excuses why he can’t get good footage
5) Unlicenced music
6) In game ISK prizes for subscribing with real money. Sounds like RMT to me.

If you want a job, send a CV to a recruiter or something. Starting a petition just screams for attention, it’s embarrassing.

I could quote a lot more than just that one, but it was short and to the point about what a lot of others are saying.

The ones that support him, all basically have the same argument as well.

1. Ani brings more people to the game (no doubt he does).

2. He helps newer players, etc.. (He does, sometimes if he doesn’t get mad at being asked a question).

So, there’s a good argument for both sides, but the only issue is that, no matter how much the ones that want Ani to join CCP, the ones who don’t will always be right that his music is unlicensed, and since he asks for money i.e. subs and donations, he could be sued for copyright infringement.

So, love him or hate him, that’s purely your choice. But the fact of the matter, is that both sides are technically correct on this matter, but it’s more so who has a harder point to argue against. Which, I think a lot of people can agree, like me, you would rather not see CCP Mad Ani, because all that will happen is he will treat more people like he’s better than him, etc..

After enough “trolling” as he calls it in both his twitch chat and the forums, he decided that if you ever want to talk to him on his stream you had to subscribe to it. Here is a screen shot from his stream a few nights ago when he made it submode only, because he couldn’t take the opinions of people on the forums. 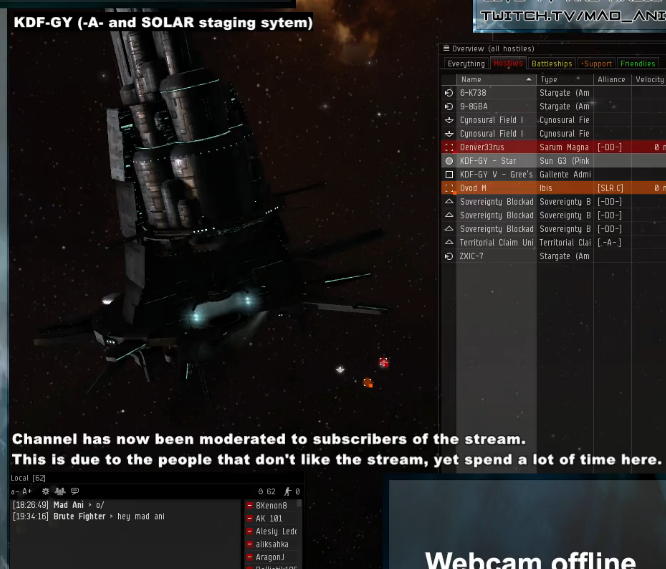 The community of Mad Ani’s twitch channel (the ones that are there a loooooooot) decided that Ani should make a petition to CCP to hire him as a full time streamer. I can see where this might be a good thing for CCP. If they have a dedicated streamer, it allows a lot more people to be involved in the sandbox that is known as EVE, and allows a lot more to happen in the terms of events in-game. If anyone’s been reading the thread, which by the way, it’s still growing a lot, you’ll see there are a fair amount of people that want Ani to be CCP or not.

I don’t mind people applying to CCP for jobs from the community (it makes sense, since the players will know best on what needs to happen a lot of the time), but there’s a webpage that is made specifically for applying for a job at CCP, and it lists all their jobs that they have open. But, the way Ani went about doing it, was making a forum post that came off (and looked like) he was begging CCP for a job as a streamer. Sure, it was his viewers ideas, but he can at least make a resume like a normal person, and apply like everyone else would, rather than asking CCP on forums to hire him.

The idea itself was good, but his ways didn’t justify or account for what he wanted in the end of it all.

Onto the more controversial things. As everyone knows, there was a huge issue with SOMER about RMT. They would give you a free 200m isk on their site, if you used them as a retailer of PLEX. After enough complaining from the public, that practice was shut down, and on the somer site itself, it says that CCP requested that it was to end.

CCP defines “RMT” as being paid real money (which somer got a partial amount of the money from the purchase of GTCs) and in-turn giving people in-game items or isk (which is what the site basically does). In Ani’s case. He flaunts on stream about his RMT abilities. He has a banner saying he’s received about $4000 USD in “donations” and because of these donations he was able to give away about 45bn ISK worth of things in-game.

If you think about it real quick, whenever he is donated money, he uses part of it to fund these in-game prizes, which to a lot of people, can be seen, and is being seen as a form of RMT. If this is really RMT it would be CCP’s decision if they should consider it RMT or not. If it is considered RMT, the fate of Mad Ani’s stream rests in the hands of CCP.