Data is unbiased and fair. It tells what happened instead of what you wish to have happened, therefore you can only plan further actions on it. I received all the killboard data from Apr 25-27 from the solar systems Jita, Perimeter, New Caldari, Sobaseki and Ikuchi, the systems where the most GSF kills happened in 2013 Burn Jita. Let’s look at the CFC member results: 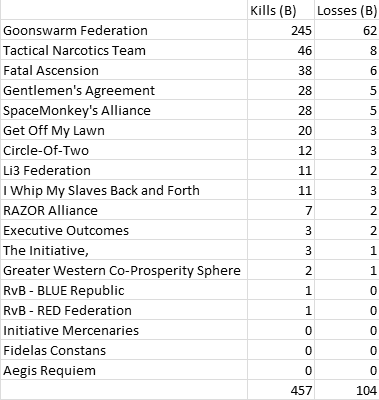 What can I say? Neither side has real reason to celebrate victory. It’s not a surprise that the last post about Burn Jita on the Goon propaganda site is dated Apr 25 and contains only small updates. There is no victory celebration on the Goon side, due to their inability to surpass last years results in time. They had to “extend” Burn Jita to get there. The comparable data I have: in the 25-27 period GSF had 245B kills while last year in the same timeframe they had 240. Considering that in 2013 they could outperform 2012 by 300%, this 1-2% increase isn’t something to be proud of.

Here is the timeline of ISK destroyed by CFC. It’s likely that they could operate 2 fleets first day EUTZ prime, first and second day USTZ prime: 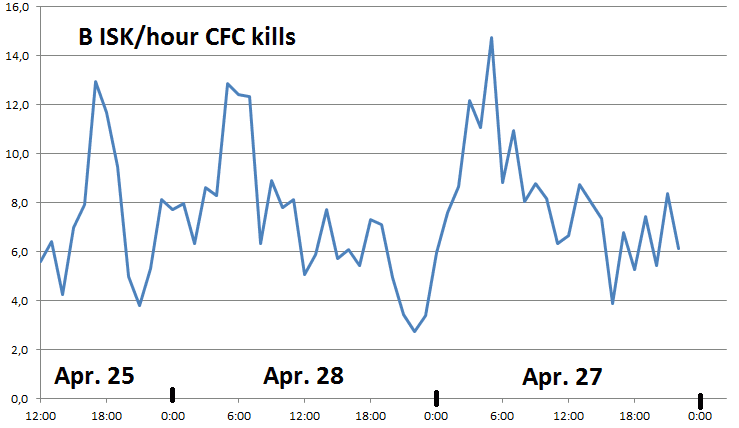 The killboards contain 12800 Concorded ships. 315 died alone or in small groups (or rather alone in the same minute unrelated). There were 37 incidents with less than 50 but more than 10 ships concorded together, 60 incidents with 50-74 ships, 56 incidents with 75-99 ships and 22 incidents with 100+ ships getting concorded, with the largest event counting 165. It seems the killboards were pretty good at tracking kills.

What does it say about 2015? Burn Jita will definitely happen, as the costs on the alliance wallets could be kept in check. However I doubt if they can even reach the 2014 results, hence the lack of celebration on CFC side. While the Cata-swarm effectively neutralize any PvP attempt to stop Burn Jita (as no one cares about Catas), their demand for swarm makes even CFC unable to run multiple fleets except for short peak hour periods, limiting their ganking power. The newly discovered troll freighters, the pretty successful neutral reppers and the announced freighter rigging options will make next Burn Jita much harder.

Note: RvB is collapsing, you can see their horrible results in Burn Jita and I also see a very one-sided killboard result against Lemmings and Marmites. A few months ago they even had 50%+ ISK ratio. I don’t have their kill data to analyze, but their loss data is very telling (since they mostly kill each other, ones kill is the loss of the other): every month in 2014 is worse than the previous. They probably shouldn’t have outed themselves as CFC members and the Morlock-Eloi charts (which got extraordinary blog hits) didn’t help them either. I guess they’ll soon close doors and move the Morlocks to Miniluv.

If you would like to read more Gevlon Goblin articles, we invite you to visits his Greedy Goblin blog.