By Glevon Goblin
Contact
Other Articles
zKillboard
People wrongfully believe that the currency of EVE is ISK, despite players can farm and use it as any other material. NPCs don’t act as market actors, if everyone is buying the same skillbook, it won’t get more expensive. The real currency of EVE is PLEX. It’s directly connected to real world money and real world time. The PLEX equilibrium price is where people consider 1 hour farming in the game and 1 hour earning money in real life equal. 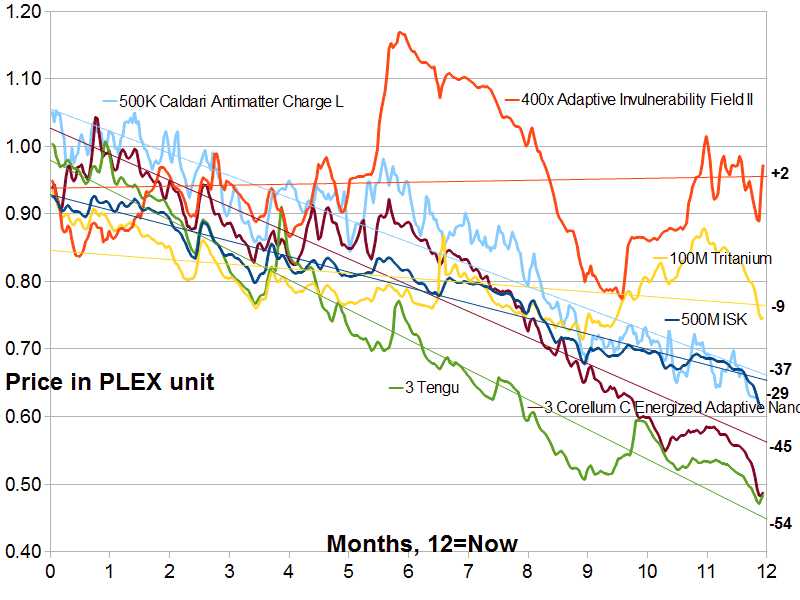 The only kind of farming that kept its worth is T2. The reason is obvious: you can’t farm moons harder. Mining barely lost value, tritanium is only 9% cheaper. So you have to mine 10% more to get a PLEX. You need 1.4x more ratting bounties to get a PLEX as ISK lost 29% of its value. If you mission for LP, you need to do it 1.6x more for the same reward. Tractor units send their regards: you need to loot 1.8x more wrecks for the same PLEX. But the largest losers are WH farmers, probably because of easier looting, salvaging and the scanner that alerts incoming holes: one has to sell 2.2x more Tengus to get a PLEX than a year before.

The constant nerfs of PvE and and the overboard multiboxing made all kind of farming activities less profitable, with no sign of slowing down. We know that a PLEX is well over 2B ISK in the Chinese server, due to even larger farming and probably less strict bot-hunting. This can easily be the future of Tranquility, an economic situation where farming is only profitable for botters and cliche-nolifers, everyone else, especially newbies must buy PLEX from real money. This simply bans casual players from the PvE and industry content of EVE. Not a good perspective for CCP.

PS: Bling minion of evil down! Some more morons. Charon and Nightmare in the same system.
Co2 is still bad. Great fit!

Finally, a reason why NPC living pirates should avoid large-fleet engagements against CFC, just as I wrote: A 110B loss, 50B kill battle between BL-PASTA-Mordus and CFC. It started pretty well, but then a 200 men blob arrived and smashed them. Yes, winning battles the day before was surely fun. But that was an outlier and this battle is the norm. PASTA and MoA should keep away from large fleet engagement or only participate in bombers or other cheap auxiliary ships. Massacring CFC goes well in small gang, why spoil it with such defeats? Also, everyone and his mother are now in Delve, they could redeploy into some unguarded backyard of CFC to slay the unsuspecting minions of evil.